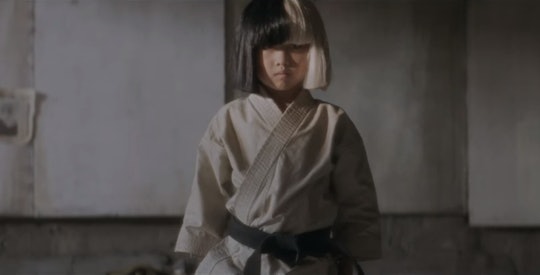 Who Is The Girl In Sia's "Alive" Video? Mahiro Takano Is About To Become A Household Name

The video for Sia’s new song “Alive” dropped on Thursday, and you might be surprised by its notable lack of Maddie Ziegler. According to Entertainment Weekly, Sia’s newest video stars eight-year-old Mahiro Takano, a Japanese black belt. Takano dons a Sia wig, now half black and half white, like we saw in the “Bird Set Free” video. The entire video, directed by Sia and Daniel Askill, features Takano practicing her kata, or karate form, in a dingy abandoned warehouse. Very Sia; very cool.

“Alive” and “Bird Set Free” will both be included on Sia’s new album, This Is Acting, which will be released on January 29, 2015. Sia explained the title to NME in February, saying: "I'm calling it This Is Acting because they are songs I was writing for other people, so I didn't go in thinking 'this is something I would say'. It's more like play-acting. It's fun."

So who is this little girl? How did Sia find her? There’s very little information to be found on Takano, though searching YouTube turns up over a thousand results with her name. If you’d like to see Takano practicing her kata without Sia’s vocals, I highly recommend it, if only to hear her adorably ear-piercing kiai (that’s the proper name for a karate shout– think “hi-ya!”).

This isn’t Takano’s first turn at acting, either. Check her out in this ad for Japanese retailer Aeon, and just for fun, try to guess what she’s advertising:

Did you figure it out? Here’s a hint: you try kicking that high. It’s an ad for Nobirutchi stretch pants, perfect for pint-size black belts.

So when will we see Takano again? Will she be in another Sia video? Will she join her on Saturday Night Live this weekend? One thing is for sure: Japan’s best-kept secret is officially out, and I can’t wait to see more from this little karate master.