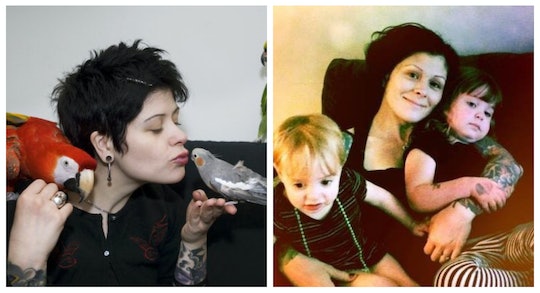 I didn’t play along with the latest Facebook fad: the 2009 vs 2019 How "Hard Did Aging Hit You Challenge." When I saw the side-by-side photos of some of my friends, I was tempted. So many of them look incredible! Gorgeous then, even more gorgeous now. I love social media and I admit I love the little highs I get when people like or comment on my posts. I wanted to get comments like the ones I saw on other people’s pages: you keep getting more and more beautiful, or, motherhood looks so good on you! But I don't and it doesn't. Still, something more held me back.

More Like This
Is The Tooth Fairy Real?
15 Face Masks For Kids That Are Cute, Comfortable, & Get The Job Done
Here's What Your Kid Is Really Saying When They Tell You They Hate You
These Couches Are Perfect For Climbing If The Nugget Couch Is Sold Out

It wasn’t that I suspected the participants had self-selected. I mean, I know they did. This challenge was not for everyone. People of means, people of relative privilege, people who eat right and exercise a lot, people who have done well in many aspects of their lives were the ones whose side-by-sides showed up on my feed. To be sure, they worked hard to look as good as they do and deserved to celebrate it, but what about the people who had not aged “well,” or rather, in accordance with society’s typical standards of beauty? I have online friends who have gained a great deal of weight in the past ten years; they did not want to post a side-by-side. I have friends who have developed life threatening and body-changing illnesses, friends who have transitioned to the gender they knew they belonged to even when the body they were born into claimed otherwise. They, too, did not post. I know some people have made poor decisions, struggled with addiction, been through the death of a marriage or a child.

There was so much more to say about the aging of my insides than my outsides, and I had no way to show it.

I know people who struggle to make ends meet and have no extra money for fancy hair styles and colors, new clothes, makeup. This challenge was triggering for many of these people and for others who try to keep (or build) a positive self-image while being constantly bombarded with beauty standards to which they do not conform. I thought about them when I pondered whether to post but ultimately that is not why I didn’t participate.

It wasn’t that I have gone grey, that I have unmistakable lines around my mouth and my forehead and the awful sag under my chin, or that I go to bed as early as my kids do. It wasn’t that nobody exclaims oh my god you look so young how can you really be that age?? when they see me anymore. There is no question that I look my age now. One thing I have going for me is that I weigh less now than I did in 2009 and no matter how body-positive we all pretend we are, the sad truth is that that goes a long, long way toward building up my self-esteem. The compliments, no matter how awkward and inappropriate they truly are, still roll in and I love every one of them.

But does my current weight define me? What if the challenge had been a year ago, when I was in a darker (and 30-pounds heavier) place and wanted to call as little attention to my body as possible? And what about everything else I’ve worked so hard at over the past decade and struggled with?

I ultimately didn’t participate because there was so much more to say about the aging of my insides than my outsides and I had no way to show it. My first Facebook profile pic was a hastily posted work headshot in which I am surrounded by birds. I remember not understanding what Facebook would become, feeling like it was temporary, that it would soon go the way of MySpace or Livejournal. I had only a handful of “friends.” Today my photos are cropped and edited (though I don’t usually bother with filtering) and far more deliberately selected, because I know how many people might see them. As much as I don’t want to admit it, I have carefully cultivated my online presence as much as the next person. I claim to be an online oversharer, but I am aware that there is so much I do not post because there is still so much ugly I want no one to see.

Within six months of taking that first photo I would be pregnant.

Ten years ago, I was 36. I was just getting back with my ex. We were moving in together. I had never owned property. The longest amount of time I’d held a job was four years. People told me all the time that I looked like I was 26 instead of 36. I laughed off the compliment and said it was because I was still a big immature baby inside, still behaving like I was 26, and maybe also because I drank a lot of water.

Within six months of taking that first photo I would be pregnant. My life was just beginning, and I didn’t know it.

Now it’s 2019. In the past ten years I have done so many things: married my life partner; birthed two babies and raised them into elementary school aged children; become a special-needs parent; bought and later sold a co-op apartment; moved out of the city and bought a house in the country; buried two cats and lost a third when he ran away; been published; grown my hair out, cut it all off, and grown it out again; lost and regained the same 30 pounds at least four times, only two of which were because of pregnancy; started more exercise regimens than I can count, failing at them all but one; gone almost completely grey; abandoned fashionable makeup and adopted an old-lady nighttime skin regimen; given up alcohol, caffeine, and cigarettes, but traded them for a ridiculous decaf coffee habit that everyone I know finds amusing because what’s the point of decaf; developed chronic pain in several places that sometimes fades into the background but never ever goes away; gone through menopause; continued therapy; developed terrible insomnia; and developed relationships with two of my four siblings (two of whom ten years ago I didn’t even know I had). And that’s just off the top of my head.

I didn’t post because my profile picture doesn’t say any of that. That being said, if my outside had improved over the past ten years, I’d probably have done the challenge anyway. My profile pic doesn’t say who I am, what I have become, and that even though most days I look and feel haggard, exhausted, burned out, used up, fed up, unnoticed, under-appreciated and very single minute of the 46 year old mother that I am, I wouldn’t change a thing. The best part of being — and looking — 46 is that I actually like myself most of the time. I also really like my life, my spouse, and my kids. I love being my daughters' mom. I am not done growing and changing, but I am more confident now and I like the direction I’m headed. Maybe ten years from now technology will have changed to capture all that’s different on the inside, too. If that happens, I’ll post then.

And I’ll tell you a secret. Aging has been a privilege for me. As a suicidal, self-harming teenager, I was sure I wouldn’t live to see 21, and when I did I couldn’t see myself ever becoming an adult, a parent, a functioning member of society. But here I am.

Along the way I have buried both biological parents far before their times and am raising two children, one with such a severe disability that I can’t be sure that she will ever reach adulthood herself. So I will take the grey hair, the wrinkly neck, the lines along my mouth and forehead. I'll take the aches and the pains and the menopause and the early bird specials. I will be grateful if I live longer than my biological parents did. In a way, maybe we should all be participating in this challenge to celebrate that we are still here, and who gives a rat's ass what we look like.