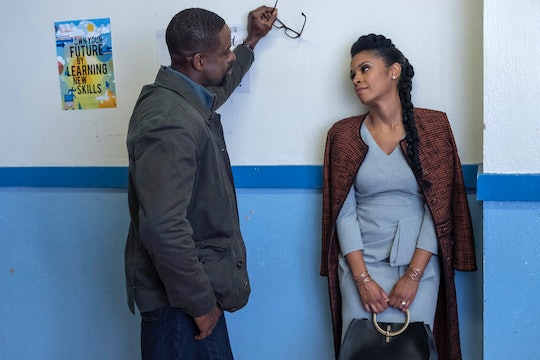 At the beginning of This Is Us Season 2, it was unclear if Beth and Randall were on the same page about having another child, and then suddenly they became these super foster parents and it was like they should have been doing this all along. Deja may no longer under their care, but that doesn't mean they won't be taking another child in soon, considering the young boy viewers briefly met at the end of the fall finale. So who is the little boy on This Is Us? Randall and Beth already confirmed that they’re still onboard with accepting foster children, so this could be the next kid they take into their lovely home.

The scene with the little boy and his social worker was shown directly after Randall mused about getting a boy foster child, so it could have been a sneak peek about things to come when This Is Us returns from its winter hiatus. Granted, Beth did say that she’s not going to be ready for their next foster child within the next week or month, but they’ve both proven themselves more than capable of caring for another child in their home — and like I said, they seem like they were meant to do it as a couple. We already knew they were great parents, so being parents to foster children coming in and out of their home seems natural for them, even if it can be such an emotional process.

If this little boy is meant to be their next foster child, though, there’s also the chance that he could be their last by way of adoption. Right now, it seems like they’re deep in the fostering game and have no real plans to step away from it. But if they were so quick to keep Deja in their home on a more permanent basis, then there’s always the chance they could do the same for another, younger child, as well.

Of course, there's also a chance that the boy was shown to simply represent the fact that there are going to be children of all ages in need of placement at any given time. At the time of the 2015 report by the Adoption and Foster Care Analysis and Reporting System (AFCARS), there were 427,910 kids in foster care in the United States, with 111,820 waiting to be adopted at that time. But the fact that the little boy was shown immediately after Randall and Beth discussed taking another child in soon makes me think he’ll be headed for the Pearson household in the very near future.

Even if the little boy eventually becomes Beth and Randall’s adoptive child, he would still serve a larger purpose in allowing them to make a difference for a child who really needs it, as Beth had originally wanted, while also giving them a third child, as Randall wanted all along. And since the series has yet to explore Beth and Randall raising a son, this little boy represents the perfect opportunity to have them stretch their parenting chops.

Either way, the big take away here is that just because Deja is gone for now (or for good), it doesn't mean that Beth and Randall have given up trying to help a child who really needs it and stay on track with their original plan. Not only are they relationship goals, but it’s now safe to say that Beth and Randall are also total parenting goals as well.