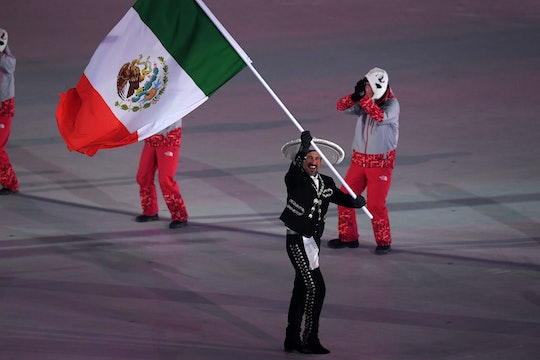 While the Opening Ceremonies of any Olympic Games is arguably an intense affair, filled with lights, dancers, performers, and other (expensive) pleasantries, nothing beats the Parade of Nations. And during the Olympians' iconic march into the stadium during the 2018 Winter Games Opening Ceremonies, viewers had one question, and one question only, on their mind: who is the Mexico flag bearer? That happiness, my friends, is a thing of beauty; a thing the entire world needs. Like, now.

For those of you wondering who could possibly be this damn happy, memorize this name: German Madrazo. According to the official 2018 PyeongChang Winter Games website, Madrazo is a 43-year-old Olympian competing in Men's Cross-Country Skiing. And when he's not waving his nation's flag proudly during the Opening Ceremonies, he's a business owner, husband, and father of three children. Madrazo took up the sport of cross-country skiing at age 42, so if you think it's too late for you to attend the Olympics as an athlete and be this damn happy, well, you'd be wrong. In fact, on the PyeongChang Winter Games website, Madrazo lists his philosophy as: "Never stop dreaming, never stop believing, never stop fighting." You guys, if that doesn't make you happy, I have no idea what in the hell will.

The Parade of Nations usually leaves room for one or two Olympians to snag the spotlight and leave us, the viewers, more than curious as to who, and why, they are. Take the Tonga flag bearer, athlete Pita Taufatofua, for instance. He stole our collective hearts at the 2016 Summer Games in Rio, when he went shirtless (and very oily) during the Opening Ceremonies, prompting a frenzy online and a slew of questions about this very interesting, very half-naked man.

And while Taufatofua returned to the 2018 Winter Games this year, too, Madrazo arguably stole the show. I mean, how can you not feel an overwhelming rush of palpable, unabashed joy as you watch this Olympian, well into his 40s, wave his country's flag with pride? The answer: you can't.

Viewers were quick to notice just how happy Madrazo was and, perhaps with a little jealousy in their hearts, took to Twitter to highlight this joyous, blissfuly happy man. Here are just a few of the tweets sent in Madrazo's honor:

Funny tweets aside, the happiness embodied by Madrazo, and our collective willingness to not only acknowledge it, but celebrate it, is indicitive of what these Olympic Games are all about: togetherness. And while it would be nice, even convenient, to pretend like our current political climate doesn't stretch all the way to PyeongChang, South Korea, it does. Currently, the United States has a president who has attacked the country of Mexico, and its people, on numerous occasions. President Donald Trump said, in June 2015 as he was announcing his candidacy for president of the United States, that when Mexico sends its people, "They're bringing drugs. They’re bringing crime. They’re rapists. And some, I assume, are good people.”

So, yes, it's wonderful to see an Olympian embrace the glory of the 2018 Winter Games with so much joy, but it's just as beautiful to see Americans celebrating that joy — a joy that is rooted in a strong, steadfast love one athlete has for his country: Mexico.

More Like This
Exclusive: 'Firebuds' Dives Into Hanukkah Traditions In Festive New Episode
Meghan Markle Spent Her Thanksgiving Volunteering For A Cause Close To Her Heart
Over 10,000 Sippy Cups & Bottles For Toddlers Recalled Due To Lead Poisoning Hazard
14 Baby Names Inspired By 'The White Lotus' That Deserve A Round Of Aperol Spritzes