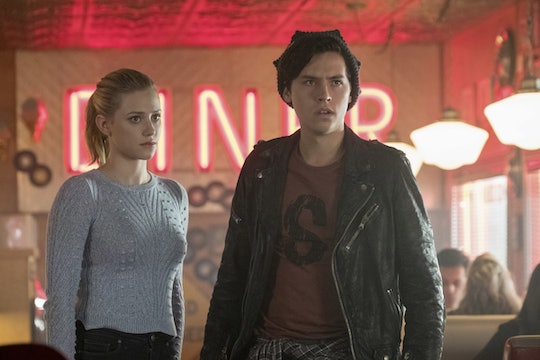 Everything We Know About The Preacher On 'Riverdale'

This wouldn’t be a traditional season of Riverdale if there wasn’t more to deal with than just the Black Hood, who actually seems like he’s been kind of M.I.A. as of late. Because in addition to whoever he is, we now also have the Riverdale Reaper, formerly known as a mysterious preacher who murdered an innocent family 40 or so years ago. But who is the preacher on Riverdale and could be still be alive today?

In the recent episode "House of the Devil", Archie and Veronica did their best to make a real breakthrough on the Black Hood case, but instead their findings revealed more about the mysterious Reaper, who we now know used to be a shady preacher who was really not a preacher at all, but just conned people into thinking he was one. After all, you'd never suspect a man of God to do anything sinister, right? So honestly, it was a rather genius plan, I suppose.

The shifty-eyed Riverdale High janitor, who seemed like an obvious red herring for the Black Hood from the start, was finally revealed as one of the members of the family who the preacher killed decades ago and who lived in the house on the edge of Fox Forest. He was the one child who wasn’t there when his family was murdered. According to the story he told Veronica and Archie, he sought justice of his own and had a group of people from town kill the preacher, though he never saw the body (because of course not since that would be too easy).

In a way, that should be the conclusion of that particular subplot and allow us to move on to figuring out the identity of the Black Hood once again, but there are still too many holes to just move past this preacher business. He might be presumed dead, but he also murdered the Conway family in the same house that the Black Hood directed Betty to one of the last times she spoke to him on the phone. Since this is more than likely not a coincidence, there has to be some link between the preacher and the Black Hood, even if the latter is a copycat or simply linked to the preacher in some way.

The preacher is likely dead or close to it, since he would have to be elderly by now if he was an adult when Mr. Svenson, the janitor, was a child. But that means the Black Hood could be his child, out to get revenge on the town that killed his father (if that was what indeed happened).

But just in case you might have missed a pretty big detail (I actually had to go back and rewind it, so don’t beat yourself up about it), the picture Mr. Svenson takes out near the end of the episode looks like it might be of the lynch mob that allegedly killed the preacher. In the image, there seems to be someone who resembles the same farmer who gave Jughead a ride and started preaching to him about being a sinner. Since he and Mr. Svenson may have both been part of what happened to the preacher years ago, they could now be working together as the Black Hood in order to take out all of the sinners that the preacher represented himself. It’s kind of counterproductive, since the Black Hood is committing murder after all, but the theory does hold some weight to it.

So while the preacher is probably dead or too old to be the Black Hood in present day, he’s very likely the killer who originally inspired the Black Hood. I don’t expect Wednesday’s fall finale of Riverdale to answer all of the questions fans have, but in regards to the preacher and the Black Hood, there almost has to be some closure.