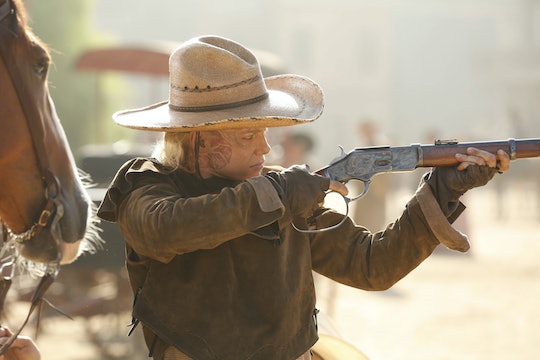 Who Is The Woman With The Snake Tattoo On 'Westworld'? Armistice Is An Important Character

With Westworld's seemingly ever-expanding world and cast of characters, it can be hard to keep up. Questions of who's who and why this person is important already abound – and we're only four episodes into the show. One character of particular focus on tonight's "Dissonance Theory" was the mysterious tattooed bandit woman, who interacted with the Man in Black in a very significant way. But who is the woman with the snake tattoo on Westworld, anyway?

The character, named Armistice, is a gunslinger played by Norwegian actress Ingrid Bolsø Berdal. She is an "associate" of Hector Escaton. Both are outlaws and, more importantly, both are hosts in the theme park. We were first introduced to both Armistice and Hector during the series premiere "The Original," when the Westworld employees pushed up Hector's scheduled robbery. They did this in order to distract from the fact that the employees would be pulling malfunctioning hosts from the park – they didn't want visiting guests to notice the disturbance. And what better distraction than an epic Old West shoot-out? Especially one set to a phenomenal orchestral version of "Paint It Black."

For the first three episodes of the season, we learned nothing about Armistice. Rather, we just saw her die in the midst of the shoot-out with Hector. Her sole claim to fame, thus far, was that some people thought she might have been featured (literally or symbolically) in the Westworld opening credits, as the long-haired, blonde female robot gunslinger on a robot horse.

The only two characters who fit this look (blonde, female, robot) would be Armistice or Dolores, so odds are this figure is meant to represent one of them.

The ironically-named Armistice's most prominent feature – besides being the sole woman bandit amongst a group of men – is her distinctive (and huge) tattoo. As we see during her introduction in Episode 4, Armistice's snake tattoo doesn't just cover her face. It goes all the way down her body, as the Episode 3 promo revealed.

It's this tattoo that made her a relevant part of tonight's episode. On his quest to track down the mysterious maze, the Man in Black was able to wrangle the first clue out of Lawrence's daughter on Episode 2's "Chestnut." The little girl told him that the maze wasn't for him, but when he pushed, she told him to "Follow the Blood Arroyo to where the snake lays its eggs." As some particularly astute Westworld fans had theorized, Episode 4 confirmed that the "snake" of this riddle wasn't a literal snake at all – apparently, it was Armistice, the snake-tattooed woman.

Lawrence and the Man in Black stumbled upon Armistice washing up in the river – possibly the "blood arroyo" mentioned in the initial maze clue. Once the Man in Black spotted her distinctive red tattoo, he had a feeling they'd hit upon the next piece of the puzzle. In exchange for information about the tattoo, the Man in Black agreed to bust Hector out of jail. He also offered up his reasoning for wanting to find the maze. Turns out, the Man in Black also knew about Arnold, Ford's former partner, and believed that, before Arnold died in Westworld, he'd left behind one last story, a "game" with real stakes where one could actually die – and that it could be found via the maze.

Once the Man in Black rescued Hector from jail (fairly easily, I might add), Armistice held up her end of the bargain and revealed to him that her tattoo is red from painting herself with the blood of her victims – the men who killed her mother when Armistice was just a child. She also threw in that she still had one man left to track down ("the head of the snake"), accounting for the lack of color in the snake near where it curled around her eye. That one man was the mysterious Wyatt, the crazed and brutal former soldier.

Now we have a link connecting the Man in Black and Wyatt, who was only introduced into the story last week, when Ford decided to finally give Teddy a mission to fulfill. That makes no less than three characters who are after Wyatt – Armistice, the Man in Black, and Teddy. Perhaps this will clarify what Wyatt's deal is and whether his greater importance goes beyond what we were initially told.