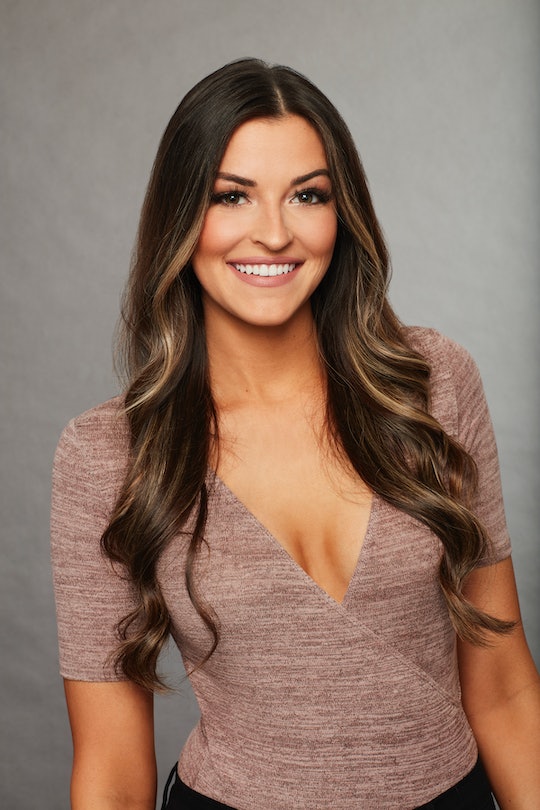 Tia Already Has An Important Connection To 'The Bachelor'

Even if you haven’t been with The Bachelor from the beginning, you probably know a thing or two about the upcoming season. And like every season before it, there are already some memorable women to watch out for, like Tia Booth, who is one of the many "dog moms" this season. But she’s also former Bachelor contestant Raven Gates’ BFF, so yeah, things just got real. But other than that, who is Tia on The Bachelor?

Before anyone cries "set up" on Tia getting a spot with the other couple dozen women on The Bachelor Season 22’s roster, she actually seems like she’s really looking for love and romance. Even if Raven may have been able to put in a good word for her (being from Bachelor Nation herself and all), Tia definitely seems like she’s going to be able to hold her own without any unnecessary name-dropping this season. According to her Bachelor bio, the 26-year-old physical therapist hails from Weiner, Arkansas and is pretty open about her interests and her life, which will both be important if she wants to make an impression on Arie Luyendyk Jr. When asked which fictional character she’d like to be, Tia answered, "Olivia Pope because she's a badass," which already has her high on my list of favorite contestants this season.

She also seems pretty fearless, since she has four tattoos — the word "peace" on her right foot, an owl on her tricep, "patience" on her wrist, and the words "Mama & Papa" on her left foot. She additionally went to a Cancun swingers resort once and I would probably pay money to hear the stories about that.

But being well into her 20s and already established in her career shows that while Tia seems like she knows how to have fun, she could also be ready to settle down. Being Raven’s best friend might work in her favor in that respect, since the former Bachelor and Bachelor in Paradise contestant was also serious about finding love when she went on Nick Viall’s season of The Bachelor and then Season 4 of Bachelor in Paradise, where she did actually find love with fellow contestant Adam Gottschalk.

Most of Tia’s social media accounts have been deactivated or are private, but according to Reality Steve, one of the talking points for her this season might be the ex she left back home in Arkansas, which could eventually be her downfall. Though who knows, she might see Arie as the man to help her forget him once and for all. She also left her dog Marlo Quinn back home, but it’s all in the name of finding and keeping lasting love, right?

It’s not all that shocking, then, to know that Tia is also very family-oriented and has a close relationship with her mom, which can only mean mama bear claws coming out if Tia makes it to hometown dates this season. I don’t know how long she’s going to be in the running for roses, one-on-one dates, and a make-out session or two in a hot tub (which are almost a given each season), but the fact that she’s real life best friends with Raven, who was and still is a fan favorite, will probably ensure her a little staying power this season.

To be honest, though, it sounds like Tia is going to earn each and every rose she gets, because she definitely seems like someone who is going to be, as they all say, "there for the right reasons."