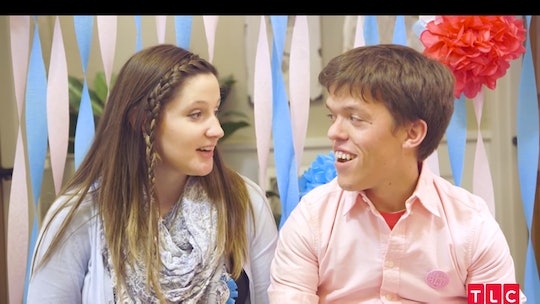 Tori Roloff Is Excited To Be A Mom

Baby and mother are doing great and Jackson is already mastered holding daddy’s fingers and snuggling with mom! He is adorable and Tori and I are loving being parents.

The young couple, who were married in July 2015, have been sharing their experiences through Tori's pregnancy. In November, the couple announced their pregnancy and followed up the announcement with a gender reveal party. This is the first grandchild for former couple Amy and Matt Roloff, Zach's parents and the stars of TLC's longtime hit series, Little People, Big World. Tori Roloff, whose maiden name is Patton, shared a sweet pic on her Instagram feed, where s he was giving baby Jackson a kiss on the cheek. She included the caption:

My heart is so unbearably full. I've only spent 4 days with this little guy and I have fallen In love completely with him. This is what I was meant to do. Mommy loves you, Jackson!

Tori and Zach have been together for a long time; the couple were dating for three years before Zach proposed in a field in 2014. In an Instagram post sharing the news of Zach's proposal (with photo credit to Zach's twin brother Jeremy). Tori wrote:

You are the one with whom I choose to spend my life. 3 years ago today this man walked into my life and changed it for good. Last night he got down on one knee and asked me the most important question of a relationship. And of course I said yes. I can not wait to spend my life with my best friend.

The two were married at the family farm in Oregon a little over one year later.

And now baby makes three! Jackson was born just two days after Zach's 27th birthday (Tori is 25-years-old). While Zach had his concerns about parenting (he admitted he was not a fan of the idea of cutting the umbilical cord, for instance), he is clearly incredibly excited to welcome Jackson with wife Tori.

Zach isn't the only Roloff to head down the fatherhood path; twin brother Jeremy and his wife Audrey are also expecting their first child later this year, a girl. Which means the Roloff family will have a new set of little ones running around the family farm. Happy news, indeed.