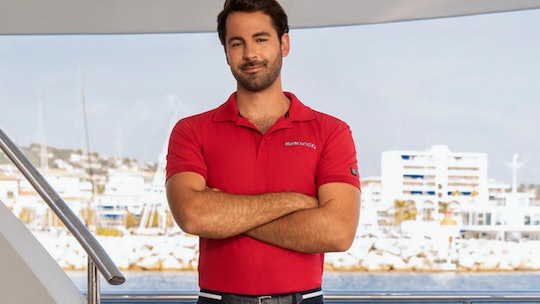 Let Me Introduce You To Travis, The New Deckhand On 'Below Deck Mediterranean'

Below Deck Mediterranean returns to Bravo for its fourth season on Jun. 3, and fans are already quivering with anticipation. Although this season will feature familiar faces like chief stew Hannah Ferrier, Captain Sandy Yawn, João Franco, and Colin Macy-O'Toole, Below Deck Mediterranean Season 4 will show a few series firsts. Not only will the Sirocco crew be sailing through the French Riviera, the Bravo reality series is also adding new cast members, including second stew Aesha Scott, third stew Anastasia Surmava, deckhand Jack Stirrup, Chef Mila Kolomeitseva, and deckhand Travis Michalzik. So who is Travis on Below Deck Mediterranean? Fans should expect a world of wild antics from this Australian native.

From the looks of Travis' Instagram profile, the Below Deck Med star is a free spirit that was born for reality television. From silly selfies to ridiculous photos with his friends, Travis knows how to have a good time. According to Travis' bio on the Bravo website, the fresh reality star grew up in Perth, Australia, where he chose to leave high school in pursuit of "finding true happiness." Travis then worked a number of odd jobs before becoming a deckhand on a sailing yacht. For the last eight years, Travis has been "living the life as a jokester, party boy 'yachtie' with a work hard, play harder attitude."

That being said, Travis does seem to understand the line between work and play. "As a deckhand, he appreciates good work ethic paired with strong communication skills," his Bravo bio reads. "If he is going to survive nine charters with his fellow crew, he hopes they’re able to match his skill and keep up with him."

Then in a preview featuring the Below Deck Mediterranean Season 4 cast, Bravo introduced Travis in the best possible way.

"Because of the stupid sh*t that I do, people think that I'm a complete idiot," Travis said as the clip glossed over a few questionable scenes featuring the Bravo star falling over and stripping down bare naked.

Nonetheless, it was Travis' work ethic that shined through. "I would like to prove those people wrong," he concluded as his sequence ended with a compliment from Captain Sandy herself.

In an interview with Bravo, the Below Deck Med newbies revealed the weirdest guest requests they've ever had. Jack shared a wild story about a mystery charter guest who asked to be "put out of her misery." Anastasia disclosed that a guest asked for a strange list of items, including "tomatoes, avocados, bananas, condoms, lubrication, more condoms and some bread." Aesha then confessed that she once had to get up at five in the morning, put on a face full of makeup, and get dressed in full uniform to blot a guest's bloody cold sore. Yikes.

Meanwhile, Travis had a sad story about nuts.

"One guest wanted the — we had almonds, which had, that weren’t peeled almonds," he said, per Entertainment Tonight. "So, we had to peel the almonds by soaking them and scraping them off with a little teaspoon."

Whatever happens in Season 4 of Below Deck Mediterranean, Travis' addition to the Sirocco crew means that fans will be laughing from beginning to end. So happy watching!