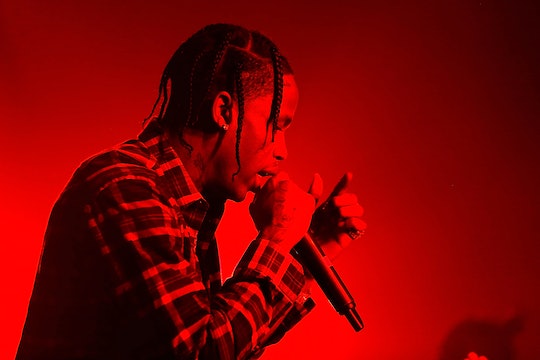 It's (allegedly) happening: Kylie Jenner, youngest Kardashian and beauty magnate in her own right, is pregnant, and according to TMZ, her current boyfriend is the father. So who is Travis Scott, whom Jenner has reportedly been dating since April? Hip-hop music fans definitely know, but others may not be as familiar.

TMZ reported Friday afternoon that multiple sources have said Jenner is pregnant. Romper reached out to both Jenner and Scott's representatives for comment but has yet to hear back. Since the report is unconfirmed, no word yet on how far along she is, but what we do know is that Jenner, 20, and Scott, 25, are an item. TMZ also floated the rumor that Scott has been telling friends they are having a girl but noted that that is very unconfirmed.

Jenner, of course, is a household name, thanks first and foremost to the reality show she grew up on, Keeping Up With The Kardashians, but also her huge Instagram following and the massive success of her beauty line, Kylie Cosmetics. Scott, though not as well known, is a hugely successful in his own right.

Originally from Houston, Scott, whose real name is Jacques Webster, according to Allmusic.com, is a hip hop artist and producer who has worked with Kanye West, one of his mentors, as well as Jay-Z, Rihanna, Drake, and T.I. In September 2015 he released his debut studio album, Rodeo, featuring The Weeknd, Justin Bieber, and Kanye West, among others and including the hit song "Antidote." His second studio album, Birds in the Trap Sing McNight, debuted in September 2016. Rolling Stone named it one of the 40 best rap albums of the year, praising Scott's integration of many, many famous names into the album while making it his own:

Even with his impressive Rolodex, Travis Scott remains the center of his album, telling late night tales of L.A. drugs and parties. He seems to feel no pressure to replicate the success of last year's surprise pop hit "Antidote," instead Birds buries deeper into ominous apocalyptic trap... he's flaunting the criticism that he bites from his heroes. The Texas native may listen to his critics, but even that won't stop Travis from being Travis.

And as popular as Jenner is, Scott has quite the fandom himself, so much so that those fans find it laughable that some people don't know who he is:

Scott and Jenner are thought to have met through Jenner's sister Kendall, according to Bustle, whom he had been friends with before. Scott had actually performed at Kendall's 21st birthday party in December 2016, according to People. Around the time Kylie's breakup with Tyga became public, she was spotted hanging out with Scott at Coachella, but the word was that the two were just friends. It later became clear that the two were an item.

Jenner was subsequently seen attending Scott's birthday party in May in New York City. Scott in turn attended Jenner's 20th birthday party in August, Hollywood Life reported. The couple reportedly got matching tattoos at one point, which would be a major sign of commitment had Jenner not also gotten a tattoo for her ex, Tyga, which she later altered. However, you know what creates a more lasting bond than any tattoo? A baby. Nothing says "you will be in my life forever, in some capacity" like having a child together, and that's what Jenner and Scott have done. In one way or another, Scott is now in Jenner's life for the long haul, which means many people who didn't previously know him or his music now will.

Scott and Jenner's relationship is very new to be taking on parenthood together, but they have an excellent example of the life a hip-hop powerhouse and a woman entirely in control of her brand can make for themselves. In one sense, Kim Kardashian and Kanye West are a tough act to follow, but in another, they've paved the way. If the expecting couple hits any speed bumps as they prepare for their new addition, they'll know where to turn.