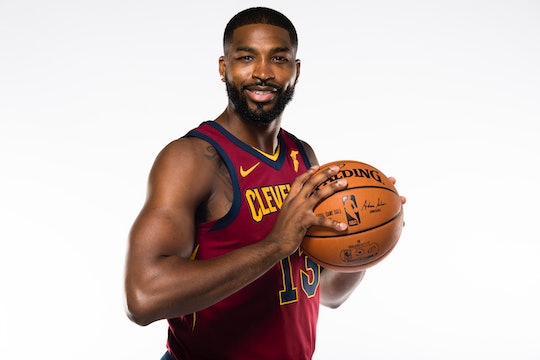 Meet Tristan Thompson, The Basketball Pro Who Is Reportedly Expecting A Child With Khloe Kardashian

I'm not sure what is going on with the Kardashian-Jenner family these days, but babies are most assuredly on the brain. After news hit the internet on Friday that youngest sister Kylie Jenner is reportedly pregnant with her first child, it seems older sister Khloe Kardashian is also getting in on the baby train. According to Us Weekly, Kardashian is reportedly expecting her first child with boyfriend Tristan Thompson. (Romper reached out to Kardashian's representative for comment but has not yet heard back.)

Cleaveland Cavalier player Thompson and the Keeping Up With The Kardashians star have reportedly been dating since Sept. 2016, after having been introduced on a blind date. A year later, it looks as though things are going fairly well for the couple. According to Us Weekly, multiple sources close to the couple have confirmed that they are expecting their first child together. Thompson is already the father of a 9-month-old son named Prince with ex-girlfriend Jordan Craig. While Kardashian, who also has her own denim line, Good American, has admitted that she doesn't have any plans to marry in the near future, she was open about Thompson's wish to have children with her on the season finale of KUWTK. She said Thompson wanted "five or six kids," and admitted she had stopped taking birth control, according to the New York Daily News:

We could start at one and we could grow from there. But now knowing I'm not on birth control is just, like, it's scary. It's like a really big step.

According to TMZ, multiple sources said that Khloe is about three months pregnant, and that she and the Canadian basketball player Thompson had conceived the baby naturally. Which would mean, if their timeline is correct, that Khloe would roughly be due around April of next year.

Her sister Kim Kardashian-West and her husband, rapper Kanye West, are expecting a baby in January via a surrogate, while youngest sister, Kylie Jenner, is reportedly due to give birth to her first child with boyfriend Travis Scott in the same month. Obviously, good things come in threes. (Romper also reached out to Jenner's representative for comment but hasn't heard back. Jenner has not yet confirmed reports of her pregnancy.

Khloe, who was previously married to basketball player Lamar Odom (the marriage ended amid revelations about his drug abuse and rumors of infidelity) was previously linked to rapper French Montana and basketball player James Harden before getting serious with Thompson. She spoke to You magazine in August about the secret to her happy, strong relationship and why she doesn't feel the need to rush into marriage:

I’m in the best relationship I’ve ever been in and it doesn’t take a ring for me to feel that way.

She continued by gushing about Thompson:

My boyfriend is very protective of me. Feeling loved and validated and secure is a huge thing. Tristan is protective of my entire family, which is beautiful. And I love that everything we do is as a union. When he speaks, it’s ‘us’ and ‘we,’ and that’s important because it shows that you’re sharing life. The best thing is that we’re able to communicate about anything, and I think a lot of relationships don’t flourish because people are afraid to voice their opinion, not wanting to rock the boat.

For his part, Thompson has been less vocal about his feelings for Kardashian, but made his love clear in a birthday Instagram post to Kardashian in June. He captioned the above photo:

Happy bday my love, this picture right here sums up how wild, crazy and how much we love each other. Let's continue to build more memories and cherish them with each other. God bless you, I love you.

While we wait for official confirmation about the pregnancy reports, it's clear that this couple love and respect each other. At the end of the day, you can't say better than that.