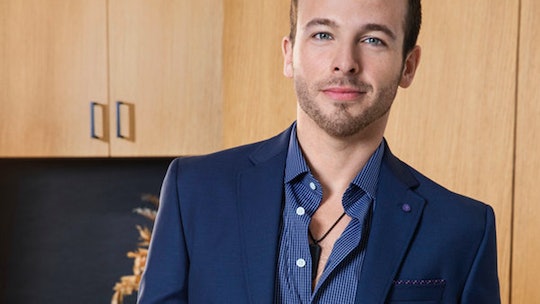 On Aug. 1, Million Dollar Listing New York is returning to Bravo with a brand new season, some new drama, and a new member of the cast. Joining Fredrik Eklund, Steve Gold, Ryan Serhant, and the big comeback of Luis D. Ortiz, is a newcomer with almost a decade of experience in real estate, and he's definitely going to shake things up on the show. So who is Tyler Whitman on Million Dollar Listing New York? The agent is ready to take on any challenge in the Big Apple.

According to Tyler's bio on Bravo's website, Tyler is originally from the South and moved to New York. When he had a "less than ideal experience" with a broker while trying to find his first home, he was inspired to work in real estate and have "a positive impact on helping individuals find their dream homes." Now, in addition to joining the MDLNY cast, Tyler works for Triplemint, a start-up real estate firm that matches buyers, sellers, and renters in New York and New Jersey.

Bravo also offered fans a sneak peek at Tyler in the trailer for MDLNY Season 8, where he certainly makes an impression. In the preview, Tyler comes off as fierce new competitor who faces off with Fredrik and Ryan.

"These young agents, they're like watching from the sidelines, 100 percent ready to kill you," Ryan says in a confessional, sandwiched between Tyler-focused clips. And despite implied doubt from his MDLNY costars, the trailer then jumps through shots of Tyler thriving in the business.

The new MDLNY cast member then briefly opens up about his dramatic weight loss, which will be featured on the new season. "One of the [storylines on the show] is how weight loss has affected my career," Tyler told the New York Post.

Now, it looks like Tyler will be showcasing his real estate chops on MDLNY. Who knows? He might even become a quick fan-favorite. "I'm going to f*cking take over," he says in the preview.

Although Tyler's introduction in the MDLNY preview was laced with plenty of potential drama on the horizon, the newcomer appears to get along with his castmates just fine. This past June, Tyler posted a photo with the Million Dollar Listing team on his Instagram page, and it was nothing short of sweet.

"Hoping I find myself in a life position one day in my future where I can try to do for all of these people something nearly as epic as what they have done for me," Tyler captioned the pic. "Pretty sure I’m the luckiest guy alive to be working with everyone here for MDL."

Nonetheless, the MDLNY broker promises fans a fun eighth season. "I have a lot of clients going through a lot of real-life and we definitely show that," Tyler told Showbiz Cheat Sheet. "I would also consider myself one of the nicer of the cast members, but the kitty has claws."