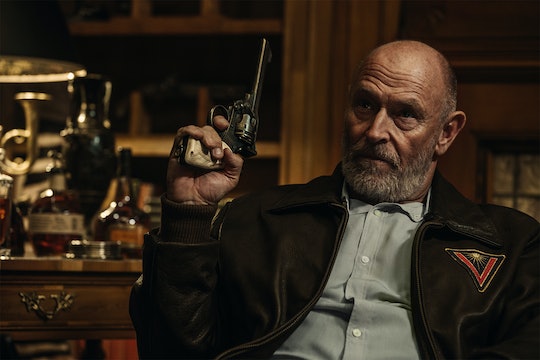 Get Ready To Meet Vulcan On 'American Gods'

If the first several episodes of American Gods is any indication, the series isn't going to run out of intriguing god characters to introduce anytime soon. While Mr. Wednesday is easily the most important of the bunch (for plot purposes), the Old and New Gods who have appeared on the show so far have virtually all been memorable — even ones like Anansi/Mr. Nancy, who have appeared only once (and briefly at that). The upcoming sixth episode is set to center on a brand new character, Vulcan, played by Corbin Bernsen. But who is Vulcan on American Gods?

Bernsen, who has previously appeared on Psych, LA Law, and General Hospital, plays the soon-to-be introduced character. In the Deadline announcement for Bernsen's casting, Vulcan is described as a "potentially recurring role" and "one of Mr. Wednesday's closest allies" who has "created a comfortable life for himself by harnessing his powers for the modern world, which makes him resistant to Wednesday’s plans." At least thus far, Wednesday hasn't exactly had stellar luck in easily recruiting any of the Old Gods he's visited (case in point: Czernobog), so his interactions with a "resistant" Vulcan seem like they'll be par for the course.

Unlike Mr. Wednesday, Vulcan doesn't appear to be introduced with an alias hiding his "true" mythological identity. Vulcan is the god of fire, volcanoes, metalworking, and the force in ancient Roman mythology and religion — the Greek counterpart of Hephaestus, god of fire and smithery.

What's particularly interesting about Vulcan, in the context of the show, is the fact that he's the only character introduced so far who doesn't have a counterpart in the Neil Gaiman novel on which the series is based. According to Entertainment Weekly's first look at Vulcan, the character was created by Gaiman — who was actually supposed to write an episode of the first season, before scheduling difficulties got in the way — specifically for the show. Vulcan is a god "who straddles both worlds" — both New Gods and Old — and the idea for him was borne out of "America's obsession with guns and gun control," co-showrunner Bryan Fuller stated. Essentially, the god of fire and metalworking becomes a god of guns in the modern era.

[Gaiman] was going through a small town in Alabama where he saw a statue of Vulcan. It was a steel town and, as he told the story, there was a factory that had a series of accidents where people were killed on the job and they kept happening because an actuarial had done the numbers and realized that it was cheaper to pay out the damages to the families of people who lost people, rather than to shut down the factory long enough to repair, and that occurred to him as modern a definition of sacrifice as there might be.

That story, it appears, was directly translated into the character's introduction on the show, based on the short, decidedly NRA-approved Vulcan-centric Episode 6 clip released by Starz ahead of Sunday's episode.

"A Murder of Gods," the newest episode of American Gods, premieres at 9 p.m. ET on Sunday, June 4 on Starz.