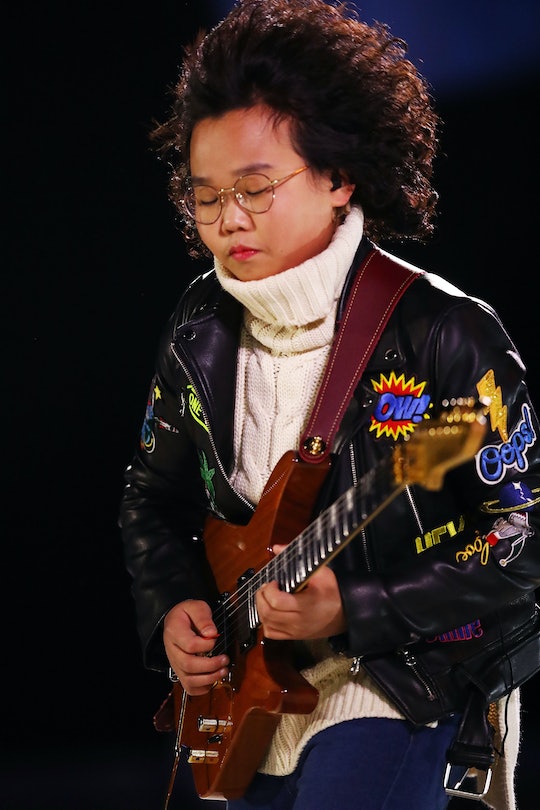 The 2018 Winter Olympics in PyeongChang introduced the world to a number of new fascinating individuals to obsess over, and the closing ceremony was no exception. Adorable children dressed as the Olympic mascot, enough K-Pop to fill your head for weeks, and even a conga line. But one performer stole the show — and my heart. So, who is Yang Tae-Hwan? The 13-year-old guitarist rocked out to a classical music remix, and viewers around the world couldn't get enough.

Yang, who I will reiterate is only 13 years old, has been playing the guitar since a very young age and was discovered on a TV talent show called Star King, according to NPR. But his young age is only part of what made his performance at the closing ceremony in PyeongChang so unforgettable. The youngster came out of the stage for his performance and began jamming away, as a swarm of drones took to the skies above the stadium. Ornately dressed dancers rocked out alongside him while others climbed over to the Olympic cauldron. Seriously, if you missed this performance, check it out online because I can't even describe all of the magical weirdness that went on.

The guitarist and wunderkind dazzled the crowd with an adaptation of the "Winter" section of the famous classic baroque symphony known as "The Four Seasons," by Antonio Vivaldi. How perfect is that? If you're itching to see Hwan rock out again, check out the video below of him laying down another guitar solo at age 10.

You and I aren't the only ones positively smitten with this little rockstar. He was the subject of quite a few tweets after that performance.

He's my hero, too, Caitlin.

Along with a stunning guitar solo, the youth of PyeongChang also offered up an adorable group of children dressed as the 2018 Olympic mascot Soohorang and an 11-year-old little boy in a boy tie named Yeon Joon who sang the Olympic anthem.

The closing ceremony also showcased South Korea’s boyband sensation EXO. Fans of the K-Pop superstars told The Guardian that the band was chosen both for its popularity and the sense of unity for the region that its members represent. EXO was formed by 12 South Korean and Chinese members, though it currently has only nine performing members. EXO’s singles are released in both Korean and Chinese to appeal to its entire fanbase. The band performed its hit song "Power," with a fireworks show in the background.

Suho, one of the bands leading members, told The Guardian that he knew the show would be an emotional one:

Watching opening and closing ceremonies in other countries, I thought that it’s really incredible to go on that stage. Now that EXO is doing so, it’s a new feeling. I think tears might fall after we complete our performance.

Another representative for the K-Pop genre performed at the ceremony as well; CL, former member of the band 2NE1, wowed the crowd with her vocals. The rapper told The Guardian that she struggled to keep her involvement in the closing ceremony under wraps:

I found out three months ago. It was very important to me. I had to prepare well, and there was the request to not tell anyone. It was a mission, and I kept the secret. Rather than explaining it with words, it is best to just show you.

Aside from speeches and flag walks, the closing ceremony was really just one big electronic dance music party. DJs pumped out loud music while the athletes moved from the stands to the dance floor, with many of them busting a move. As sad as it is to see the games come to a close, the closing ceremony provided the opportunity for Lindsey Vonn to lead a conga line. I mean really, what more could you ask for?

More Like This
Alec & Hilaria Baldwin Welcome Baby #7, And Revealed Her Cheerful Name
Gabrielle Union Admits She May Be Becoming A Bit Of A Dance Mom With 3-Year-Old Kaavia
Rihanna's First Post Since Giving Birth Confirmed She's Performing At The Super Bowl
Snooki Hints That A Sunday Dinner With All The Jersey Shore Kids Is In The Works