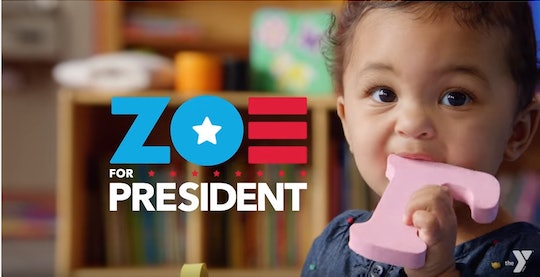 Who Is Zoe In The Zoe For President Ad? This Baby Has High Hopes For Our Future

Well, I know who I am voting for, and it's not Donald Trump, thank you very much! Her name is Zoe. I don't know how she feels about the issues, though I have a feeling she supports the concept of naps and possibly stuffies. Her debate performance remains to be seen and I'm not sure how well she's doing in the primaries. But according to a brilliant new ad campaign, Zoe is running for President. So who is Zoe' in Zoe for President ad?

The Y (once known as the YMCA before it was rebranded in 2010) has begun an ad campaign in support of genuinely important issues in American communities. Which, weirdly enough, have nothing to do with the size of anyone's man parts or how much water a candidate may or may not drink during a debate (Right, Senator Mark Rubio?) The "For A Better Us" campaign deals with issues like education and meal assistance. So, you know, food and learning. And the sweet little face of their campaign is young Zoe, who will be running for president. Well, maybe. In 2064. If she gets an education and food and support. If she gets nurtured, can enjoy fresh air, and enjoys good health. And if we can all just work together to make sure Zoe can find her way to the White House.

Before I continue, can we all just agree that we are 100 percent in love with Zoe? OK, moving on. Even though we've all established we love her, who is Zoe, the sweet little girl destined for greatness? It turns out Zoe is every child, according to the Zoe For President website. Zoe isn’t just one kid, she’s representing every child who deserves a shot at greatness. By supporting Zoe, you’re helping kids in your community gain the skills and confidence they need to reach their potential, from birth to president (or astronaut, or doctor or playwright) and beyond.

The series of campaign ads were created by advertising agency Droga5. And the response? Pretty much aaaawww across the board, natch:

While we all brace ourselves for the next round of debates and primaries, let's take a moment to consider Zoe. A 1-year-old, happy looking little baby who deserves every opportunity to reach her potential. The "For A Better Us" campaign is focusing on all stages of child development: early learning readiness, outdoor leadership, mentoring programs, safe spaces, and after school programs.

So if Zoe were running for president right now as a toddler, she would already have a pretty solid platform. I'm ready to throw my lot in with Zoe — with all the Zoes actually. I'm ready to help them play and eat and laugh and learn. Because, as the Zoe For President campaign so aptly points out, change is coming... eventually.