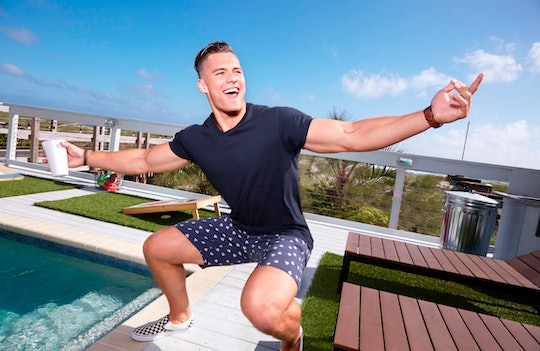 This 'Floribama Shore' Star Is All About That Fitness Life

The cast of MTV Floribama Shore hasn't yet coined any new terms as the cast of the original Jersey Shore did early on. But if anyone is all about GTL (or, gym, tanning, and laundry), it’s probably going to be Jeremiah Buoni, whose Instagram is full of enough workout photos and videos to make Mike "The Situation" Sorrentino feel self-conscious. And fans are no doubt going to be asking right away, who is Jeremiah Buoni from MTV Floribama Shore? As the resident gym rat at the cast’s vacation home in Panama City Beach, Florida, fans can probably expect to see him working out daily and get to know his extensive routine.

But, as to be expected, there’s a lot more to Jeremiah than his muscles, though I don’t think anyone is really going to be complaining. In fact, in the promo for MTV Floribama Shore, fellow cast member Nilsa Prowant says, "I’m gonna climb Jeremiah like a tree if I get the chance." And right after that, she’s shown looking on as Jeremiah unclogs a sink with a plunger and says that she’s "jealous of the damn plunger." So that incredibly muscular physique is definitely going to be something that almost immediately attracts some of the women to him.

Aside from hitting up the gym nonstop, Jeremiah also works and lives in Amelia Island, Florida and works as a bartender at The Lobby Bar in the Ritz-Carlton Hotel. He’s also not shy about showing off his body in some professional modeling shots posted on his Instagram, so maybe MTV Floribama Shore is his ticket to stardom? When he isn’t spending what I assume to be hours per day at the gym and working at the fancy Amelia Island hotel, Jeremiah also seems to be all about family. Specifically, his younger brothers, who basically look like Jeremiah clones.

Recently, Jeremiah spoke to News4Jax in Jacksonville, Florida, and seemed as pumped for the new Shore series as fans probably are, and that alone is so endearing. Plus, he’s made some new friends and family while filming. "Now you’re in the south, where it’s more family backgrounds, and a lot more southern hospitality," he said. "And basically the only rule we had in the house was no rules."

Instead of using MTV Floribama Shore as a way to be another reality star, Jeremiah also admitted that he plans to use the platform for good, if possible. "Everybody in the end, they do want their point to talk," Jeremiah said in the news interview. "For me, that’s what it’s about. I mean, I love the idea of being a motivational speaker, and I feel like if I’m about to get my words out and people are able to listen to me and I give them somewhat of motivation, that’d be enough. And it’s all about having a box to stand on to talk."

Despite being one of the buffest guys in the MTV Floribama Shore house, Jeremiah seems like he has a down to earth personality, which might come from growing up home-schooled with several brothers and sisters. So at the very least, living in a house of both men and women — who are more than likely loud, messy, and full of drama — won’t be too much of a stretch for the aspiring motivational speaker.

Since family and keeping himself healthy are both important to the Florida native, I don’t see a whole lot of drama surrounding Jeremiah this season, so hopefully he’s able to do what he set out to and use his newfound reality TV stardom for good.