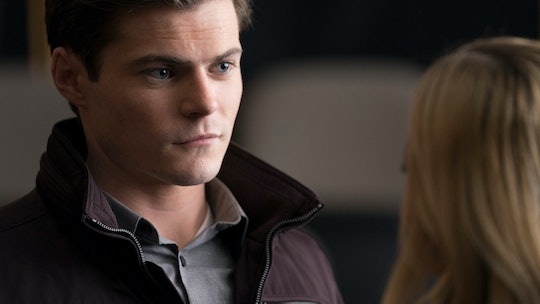 So Who Isn't Suspected Of Killing Nolan On 'PLL: The Perfectionists'?

Toto, I have a feeling we're not in Rosewood anymore, but there's still plenty of liars to go around. Pretty Little Liars: The Perfectionists has made a big splash on your busy Wednesday night television schedule — literally. The premiere ended with the murder of Nolan Hotchkiss, who seemed to have been pushed off a Beacon Heights University roof by a hooded figure. So who killed Nolan on Pretty Little Liars: The Perfectionists? The Alison DiLaurentis of the spinoff series might be dead, but creator I. Marlene King has a bit of insight that will surely tide you over for the next few episodes.

Unfortunately for book readers of the Sara Shepard novels of the same name, The Perfectionists doesn't follow the original story — even in the pilot. The book follows five female characters: Ava, Caitlin, Mackenzie, Julie, and Parker. If you've only seen the show and you're a bit confused, don't worry. Only Ava and Caitlin made it to the Freeform series. Oh, right, The Perfectionists also added PLL alums Alison DiLaurentis and Mona Vanderwaal to the cast.

Regardless, the girls in the book series are brought together by their hatred of Nolan and joke about killing him without the intention of actually going through with it. Nolan does, however, wind up dead in the same fashion. In a major plot twist in the books, readers discover that Julie and Parker are the same person, and Parker died earlier in the story. Julie then creates Parker, a split personality. In the book, Julie as Parker killed Nolan, but she can't remember any of it.

It's clear that the Freeform series is deviating from the book, especially when you consider that Julie and Parker aren't in the show. So then what happened to Nolan and is he really dead?

Speaking to TV Guide, King explained that there are two mysteries that fans need to look out for this season. "One of which is who pushed Nolan off the roof," King said. "I am not going to say what the other one is."

In an interview with Us Weekly, King confirmed that Nolan is dead in The Perfectionists. However, you will see more of actor Chris Mason in the future.

"Oh yeah, he’s dead," King said. "There’s no coming back from that. Chris won’t participate in every episode but I think he was in, like, seven out of ten. It’s not the last you’ve seen of Nolan even though he’s no longer currently living on this Earth."

As to whether or not the person who murdered Nolan was the person he thought he was meeting, King teased, "I can’t say but that question will be answered!"

Following The Perfectionists premiere on Freeform, TV Guide asked the new cast of liars to explain why their characters couldn't have been Nolan's killer. The results are interesting to say the least.

So what about Nolan's mother, Claire, who has been suspicious from the start? Actress Kelly Rutherford doesn't deny a thing.

"You can suspect her," Rutherford said. "You don't know. That's the beauty of this show and this genre. It's kind of like life in that we don't always know the answers. I'm old enough to know it's better not to defend yourself."

Not going to lie. I don't buy any of these alibis. Everyone is suspicious and any one of these characters could be guilty — whether they realize it or not.