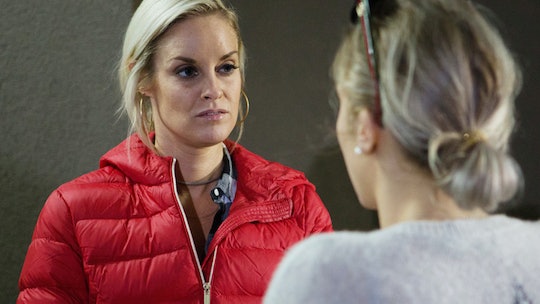 Send Help, I Need Closure On The 'Southern Charm' Rumor About Danni & Shep

The second half of the Southern Charm Season 6 reunion is underway, and it looks like Danni Baird is at the center of all the drama. Despite her recurring cast member status on the Bravo reality series, Danni has faced off with Madison McCroy and Austen Kroll on more than one occasion. And in the Aug. 28 special episode, Southern Charm promises to answer any lingering questions from the season, including who made up the rumor about Danni and Shep Rose during the trip to Colorado.

For those of you who don't remember the rumor, there was an explosive altercation between Danni, Madison, and Shep in the twelfth episode of the sixth season. Madison and Shep were in a heated argument over Austen, and Madison suddenly accused Shep of giving Danni chlamydia. Shep and Danni immediately denied the claim. Then when they asked Madison where she heard the rumor, she responded, "That’s what I heard. Ask Austen."

As it turns out, Madison was telling the truth about Austen's involvement, as he one who told Madison the rumor about Danni and Shep. The reality star addressed the situation on the Aug. 14 episode of Watch What Happens Live with Andy Cohen, but he didn't exactly apologize for his actions.

"You're dating someone. You really think that they're not gonna divulge the things that you tell them, and I unfortunately just kept on getting burned," Austen said. "I want to be open, and it bit me in the ass a couple of times, that's for sure."

Following the Colorado episode in July, Danni opened up about the rumor and the on-again, off-again couple on Bravo's The Daily Dish.

"What Madison said was very hurtful and untrue, and I feel as though it was clearly calculated, both directed at Shep and to me," Danni shared. "I don't think that Austen is innocent in the matter. They had both, unbeknownst to me, had been harboring some underlying resentment toward me particularly."

The reality star hinted Austen and Madison had pent-up animosity from old drama with Danni's boyfriend, Gentry Todd Radwanski. Madison was accused of sending messages to Gentry, and Austen responded by breaking up with Madison. Regardless, it seems Danni hasn't seen much of her Southern Charm co-stars since the incident.

"It's gonna be hard for me to even look at either of them," Danni revealed. "I'm still very betrayed. I am very hurt. I feel as though I've seen their true colors, and no thanks. Honestly, there's nothing really an apology could do."

Now, as part two of the Southern Charm Season 6 reunion approaches, fans can expect a range of emotions when Danni reunites with Austen and Madison.

"I know when I do see [Austen and Madison], I mean, all of these emotions just come, and it's not even anger," Danni told The Daily Dish. "I just get emotional. Like, how could you do this to me type of thing."

So stay tuned. This one is going to be messy.