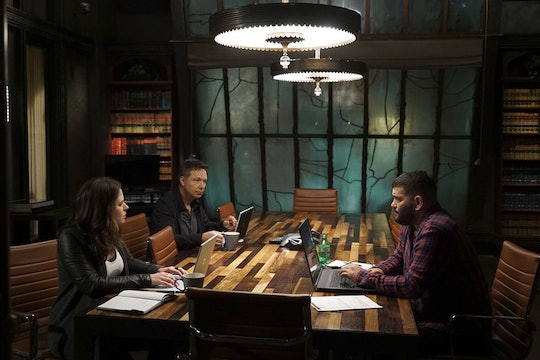 Tom Made A Surprise Confession On 'Scandal'

It was never going to be this easy to find Frankie Vargas' killer on Scandal, especially when someone so obvious like Cyrus was arrested along with the show's resident sociopath, Tom. But since he did have a certain agenda, who paid Tom to frame Cyrus on Scandal? Someone with money orchestrated the idea of his false confession, naming Cyrus as his accomplice, so it's definitely someone who also wants to take Cyrus down. The only two main players of Scandal who are missing right now are Jake and Papa Pope, who have worked together on and off over the years on different B613 plans.

Could the plan to take down Vargas and Cyrus be part of some bigger elaborate scheme that Rowen is the mastermind behind? Crazier things have happened. Obviously Olivia and Fitz are clean as far as framing Cyrus goes and, as his only real friends, were obviously sort of torn up at the idea of him getting the death penalty.

That leaves Jake and Rowan, who absolutely have access to the $2 million that was deposited into Tom's bank account once the confession for the assassination on the president-elect was made. Because although he readily confessed to the murder, Tom was obviously just a small part of a bigger plan and actually wasn't the one who pulled the trigger. He's innocent, which means so is Cyrus

Getting the willing confession from Tom was way too easy for it to be the real deal, but when Cyrus was dragged into it too, effectively ruining his life and his career, Tom had apparently succeeded in doing what he'd originally set out to do. He admitted to Cyrus that he just wanted him to suffer, so he took someone's deal to frame his former lover even though it meant also imprisoning himself. So who's the money behind all of this?

Fans are probably going to have to wait until closer to the end of the season to get the final answer on that, but it's been clear for a while now that Jake is still under the control of Rowan and the promo for the next new episode of Scandal on March 9 finally shows his return this season. That can't be a coincidence, right? Getting rid of Cyrus would usher in Mellie as the new president and Jake as the vice president, which is obviously ideal for Rowan so that he can continue to control him, but on an even larger scale.

Even though Cyrus has made plenty of enemies over the years, no one stands to gain as much as Jake and Rowan do aside from Mellie and I seriously doubt she is the guilty party behind this. But hey, I guess on this show you never know.