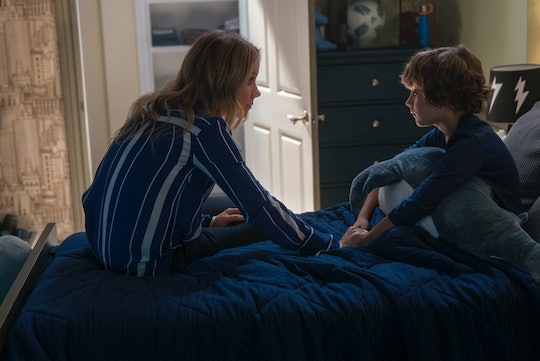 Dead To Me is about a female friendship at its core, but it's also about grief. In the series, Jen (Christina Applegate) lost her husband in a violent car wreck and is left to raise her two boys alone — which is about as simple as it sounds. The performances by the two young actors portraying her sons are particularly impressive given the dark subject matter. So, who play Jen's kids on Dead To Me? They are on all 10 episodes of Season 1 and will probably play a big part in the series in the future.

Jen's oldest son Charlie is played by Sam McCarthy, and he's relatively new to the industry, which is understandable as he's only about 17. McCarthy made his TV acting debut in 2016's short-lived drama The Family and his feature film debut two years later in All These Small Moments. His dad is Andrew McCarthy — who you might recognize as Blane from the classic John Hughes film Pretty In Pink. It all came full circle when McCarthy Senior's Pretty In Pink costar Molly Ringwald played McCarthy Junior's mom in All These Small Moments.

In an interview with The Hollywood Reporter in 2018, Ringwald said of working with her former costar's son, "I never knew Andrew when he was that age, so it was sort of a window into how he might have been."

McCarthy has also had two small roles in The Blacklist, a show his father directs. He's absent from social media, so his personal life is pretty private. It's probably for the best, because his character on Dead To Me is a moody teenager and people on Twitter sometimes find it hard to separate actors from their characters.

Jen's youngest son Henry is played by Luke Roessler who is just 12. His filmography is quite impressive for such a youngster. In 2015 he made his TV debut in the series Hell on Wheels and had a guest spot in the CW series Arrow that same year. Since then, he's appeared in popular series like Bates Motel, Once Upon A Time, Legion, and Supergirl. He has a small role in the movie Deadpool 2 and appears in a Season 3 episode of Riverdale. He seems to be a bit of a CW darling, so keep an eye out for a cute blond kid with curls on the network.

It's easy to find details about what Roessler is up to because he has an Instagram account where he keeps fans updated on current adventures like Dead To Me promotional events. And of course he has pictures with his TV mom Christina Applegate and series creator Liz Feldman on the account.

But when your series is executive produced by comedy royalty like Will Ferrell, you have to get a picture with him at the premiere. Roessler may be young, but the moment below wasn't lost on him (or whoever runs his account). The caption reads: "I know him!! I'm 'Dead to Me' now! With The Legend and our Executive Producer Will Ferrell..."

Roessler's character Henry is undeniably sweeter than older brother Charlie. That's very understandable as Henry is not a mourning teenager. But, no matter what their characters are going through, all you have to do is watch a few episodes of Dead To Me to know that both Roessler and McCarthy have bright futures ahead of them. I hope those futures include a Season 2 of the hit dramedy.