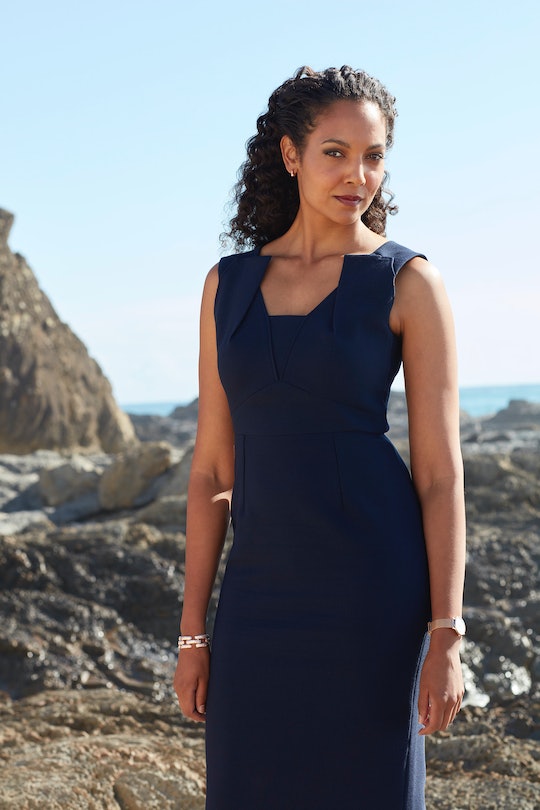 Ana DuMont On 'Reef Break' Wants To Make You Smile

ABC's new hit show Reef Break is the fun, action-packed drama your summer was waiting for. Poppy Montgomery leads the show as Cat Chambers, a former thief now helping the governor of the island, Ana DuMont, catch criminals. The series was filmed in Montgomery's native Australia, so the cast is full of actors from down under, including Melissa Bonne, who plays Ana DuMont on Reef Break.

Bonne was born in Zimbabwe and moved to Australia with her family when she was five years old. She studied acting in drama school and since graduating has starred in popular Australian series like Pulse and Janet King.

Bonne told the Sydney Morning Herald in 2016 that it took her nine years to land the audition for Janet King, which was her first audition for a TV role. She also said she wishes writers would pay more mind to deliberately writing about diverse experiences. "It starts with the stories – people being mindful of how things have changed in society," Bonne told The Herald. "If you stand and look outside your own experience you're suddenly going to get a richer version of life that will resonate with more people. It kind of feels like a no-brainer."

The actress told Film Ink in 2016 about the movies that inspire her, and the one that sparked her desire to be an actor might surprise you. "When I think of [Jurassic Park], I connect immediately with my dad and his love and appreciation for movies, and also with what it meant for us as a family to have shared in the excitement and terror and thrill of such a deeply moving and extraordinary film," Bonne said. "Although I didn’t realise the meaning of this at the time, this was the moment when I developed the need to be a part of something that had the potential to bring so much joy to a family. It was the moment that sparked in me what would one day become an unshakeable love for the craft and joy of acting.”

But a completely different movie inspired her to actually pursue her dream to act — Pretty Woman. "I loved anything that had Julia Roberts in it because I just believed her all the time," Bonne told Film Ink. "I always wanted to play her characters, more because to me, she was the one who made the movies that she was in so enjoyable, and I wanted to give people that same joy. I wanted to be able to be that type of actress for people."

You may have noticed one word repeated often when Bonne talks about acting — joy. Spreading joy to anyone who watches her work seems to be her main motivation for taking any roll.

That means Reef Break is perfect for her, because her character Ana is in charge of convincing Cat to help with cases and generally keeping peace in paradise by making sure all of the governors secrets stay hidden. Just call her Reef Break's resident "deputy governor of joy maintenance."