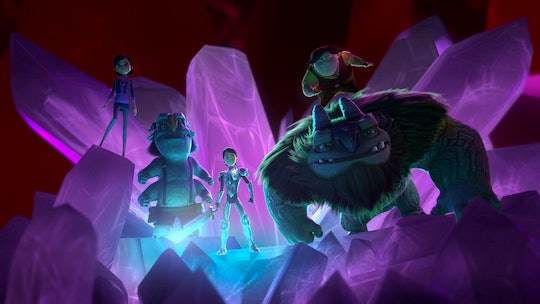 I don't really know how you go from playing a motorcycle gang member, to a fiery demon-like superhero, and then to an animated troll, but apparently it's totally possible, at least when it comes to Ron Perlman, who plays Bular on Trollhunters. The actor isn't really known for his voice-over skills, or his softness above all else, but the latter isn't what this role is about, so he should be fine. On the new Netflix series from Dreamworks, Bular is the lead antagonist, who quickly becomes Jim's (Anton Yelchin) enemy after the human boy takes on the job of being the next trollhunter — a role Bular has coveted for himself.

But since it's a family series, Perlman probably isn't going to bust out any of his more adult-like language on viewers. Still, though, you have to assume that his natural attitude and gruff voice is what got him the role and will be what brings Bular to life as the "bad guy" troll. Since in the series, Bular feels like he's been passed over for a role that should have been traditionally his, it makes sense for him to become Jim's main nemesis in the story.

The character's father has been imprisoned for 400 years, leading Bular to believe that he is the rightful heir as the next trollhunter. But when Jim accidentally stumbles upon an amulet, it's out of both of their hands. But that doesn't stop Bular from taking the next logical step and becoming the lead's next big foe.

This isn't the first time that Perlman has worked with Trollhunters creator Guillermo Del Toro, as the filmmaker was also behind the Hellboy series Perlman has starred in. But obviously this time, the project is a little different.

Long before he was using his voice to bring Bular to life on Trollhunters, Perlman was the motorcycle gang patriarch on FX's Sons of Anarchy, where he played a less than family-friendly character for the five seasons he was on. He's also extremely well known for his portrayal of Hellboy from the movies of the same name, and while those were more action than anything, they helped prove that he can play a wide range of characters.

But for all of the action, violence, and drama that Perlman has been known to tackle in his TV and movie roles, it's pretty surprising to learn that playing Bular on Trollhunters isn't his first time lending his voice to a cartoon character. In fact, over the years, Perlman has been doing voice work for cartoons like Kim Possible (so yeah, he's an OG), Teen Titans, and Adventure Time.

According to UPI.com, Perlman recently said in a round-table interview at the New York Comic Con that doing more family-oriented material feels like a natural move in his career.

When I started having kids, I became obsessed with doing as many things that could get me street cred in the carpool lane at school. That's what I became obsessed with and that's kind of never left me. I mean, I feel like, if I can get to kids, then I'm really kind of doing the Lord's work, you know? Not that I reject more adult stuff, but whenever I get the opportunity to play in that world... it's delightful.

So no, Perlman isn't a stranger to doing voiceover work on different animated projects. In fact, you may have even recognized his distinguishable voice as Gnarlack on Fantastic Beasts and Where to Find Them. But as he's most well known for his more morally ambiguous roles, it'll be interesting to see him in such a different atmosphere.