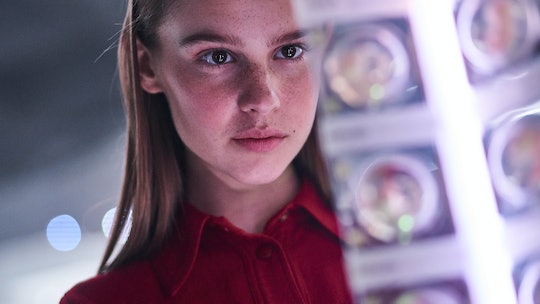 Hilary Swank Is Rooting For Her 'I Am Mother' Co-Star, Clara Rugaard

I Am Mother, which premiered at the 2018 Sundance Film Festival, is a sci-fi thriller that will keep you guessing until the very end. The film features Hollywood powerhouses like Academy Award winner and P.S. I Love You actress, Hilary Swank, as well as the voice of Bridesmaids' Rose Byrne. But chances are, fans won't recognize the movie's lead. So who plays Daughter in I Am Mother? Clara Rugaard may be a newcomer in the entertainment industry, but hopefully, she stands well on her own.

If you think you've seen Rugaard's face before, you might be mistaken. According to her profile on IMDB, the Danish actress has only been in six projects, including her involvement in I Am Mother. Rugaard made her acting debut in the Danish movie, Min søsters børn i Afrika. She then made two brief television appearances on Disney UK's The Lodge and the Shondaland drama Still Star-Crossed. The actress also starred in the Irish mystery, Good Favour, and the Max Minghella-directed musical film, Teen Spirit.

It goes without saying that working with Swank, a well-seasoned actress with over two decades of experience under her belt, was a chance of a lifetime for Rugaard. In an interview with Entertainment Tonight, Rugaard shared her relationship with Swank during I Am Mother.

"I was observant," Rugaard said. "There were literally scenes ... where I would find myself forgetting that I was acting, and I was like 'oh, I need to say my line now.' It's just so fascinating watching [Swank] work and obviously, she's fantastic. People know this. It's a known fact."

When speaking to Blackfilm.com, Swank also touched on their bond while filming I Am Mother.

After Rugaard explained that Swank took her under her wing, the Million Dollar Baby actress said, "[Rugaard] comes in with this doe-eyed excitement and it's so refreshing because when you've done it a long time... it's invigorating for everybody. I also want to protect her."

Then in a separate interview with Parade, Swank revealed that her mentor-mentee relationship with Rugaard felt more maternal. The actress said:

I felt 100 percent maternal toward her and I still do. With her fresh-faced what they call in Hollywood “a breakthrough performance,” I wanted to make sure she was protected. The business side of this can be so hard and it’s so different than what you experience on a set from the creative side, so, I’m always here for her and I want to be able to help guide her if she needs it, and navigate through the difficult waters of what it’s like.

Although I Am Mother is one of Rugaard's first leading roles and the actress is still considered a newbie in the business, with a Golden Globe-winning co-star at her side, who knows what lengths she will reach in the future. In any case, it seems clear that this movie is just the beginning for the fresh young actress and chances are good you'll be seeing her a lot more very soon.

I Am Mother is now streaming on Netflix.