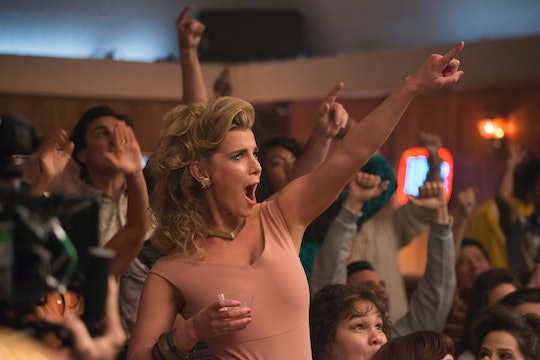 Debbie From 'GLOW' May Look Familiar

Today, even people who aren’t fans of professional wrestling know enough about the WWE Divas to get a handle on the fact that they’re the female wrestlers of the organization. But in the '80s, there was GLOW (short for Gorgeous Ladies Of Wrestling). So when news broke that Netflix would be releasing a show about a group of women who participate in the entertainment sport, I will beyond thrilled. The series stars Alison Brie, but what other familiar faces can be found throughout the show? For example, who plays Debbie on GLOW? Betty Gilpin's character will more than likely look very familiar to a lot of fans.

The actress most recently took on a role in the new series American Gods and before that, fans might know her from Masters of Sex or Nurse Jackie. She’s been acting for years and definitely earned her spot in the new Netflix series where she’ll be playing opposite Brie as her rival on GLOW, so get ready to see some pretty intense scenes between these two.

The most interesting thing about this latest Netflix project is that GLOW was definitely a real thing back in the '80s and acted as a sort of jumping off point for actresses or models who wanted to break into the entertainment industry but may not have been given the chance to in other arenas. (Pun very much intended.) But instead of being strictly about wrestling and the pomp and frill of the WWE as we know it today, GLOW was basically a variety show that included these female wrestling personalities born from the show itself, which fans will see get brought to life throughout the 10-episode first season.

In an interview with Out magazine, Gilpin talked about her character, Debbie, on GLOW and how the relationships between the female wrestlers and entertainers play a big role in the series. "You can share a cavewoman level connection, but the circumstances of your lives may not line up for you to be friends," Gilpin said of her and Brie’s conflicting characters in the series. “That’s kind of what happens with them.”

But she went on to say that the point of the women on GLOW is to try and do away with the catty stereotypes of female relationships. "They’re usually portrayed as backstabby, on a Bravo TV level," she added. "And even though I love me some Bravo, there’s more to be mined there."

Gilpin, who plays a failed soap opera star-turned-GLOW-headliner on the series, also said that she did all of her own stunts for the first season, so she’s definitely not afraid to get dirty when it comes to her roles.

Brie might be heavily featured in the trailer for GLOW, but it’s clear that the back and forth between her character and Debbie will be what drives a good portion of the series, if only to try and do away with the stereotypical female rivalry as the show goes on. GLOW is available to stream on Netflix starting June 23 and honestly, the humor, empowerment, and big '80s hair can't come soon enough.