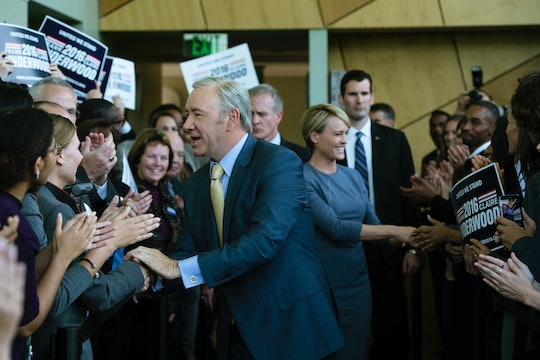 Frank Makes A New Friend On 'House Of Cards'

Frank and Claire Underwood rule with an iron fist on House of Cards. One wrong move, one hint that perhaps you aren't as loyal as they once believed... and you're gone. Except when it comes to their marriage. The ultimate power couple are more relaxed about traditional rules of fidelity, and it appears to be working for them (mostly). I'm sure we all remember the dearly departed Edward Meechum, Frank and Claire's loyal sometimes-paramour, who lost his life protecting Frank. Now it looks like Eric Rawlings, a new House of Cards character played by Malcolm Madera, might be filling Meechum's shoes as a new love interest for Frank. Here's hoping he doesn't meet the same end. Warning: spoilers for House of Cards Season 5, Episode 9 ahead!

Rawlings first sees Frank during the presidential campaign. The two glance at each other and smile, and Frank has a real moment of recognition (perhaps because the actor playing Rawlings, Madera, also played the role of Frank's great-great grandfather, Confederate soldier Augustus Underwood, in 2014 and 2016). Because Frank is the president, he naturally gets a dossier on Rawlings and arranges a meeting. There's some confusion that leads us to believe the two may have met before, an inside joke or two. Frank and Rawlings play with some toy soldiers, Rawlings tells Frank he is a personal trainer, and a budding friendship is born.

While Claire is busy getting embroiled in a steamy (if somewhat dull) romance with sleepy-eyed writer Tom Yates, Rawlings is helping Frank get back in shape. He comes to the White House residence in his track suits, looking fresh and positive and full of life. And he brings out the best in Frank. Someone who is softer, more engaging... the man Frank Underwood might have been, if only. The whole thing reminds us all a little of Meechum, and the very real affection Frank felt for his former security guard.

The two finally shared a stolen moment hidden in the stairwell during the night of Frank's inauguration ball. A happy occasion for all, it would seem. Frank was clearly enjoying a night to be even more drunk with his own power than usual, and he's found a new friend (although watch for his rather sweet homage to Meechum, looking at the painting that hangs over his hand print).

Madera is a relatively new face to television. He not only guest starred on House of Cards, but also on HBO's Boardwalk Empire. After Season 5 of House of Cards, though, he's sure to become a real presence.