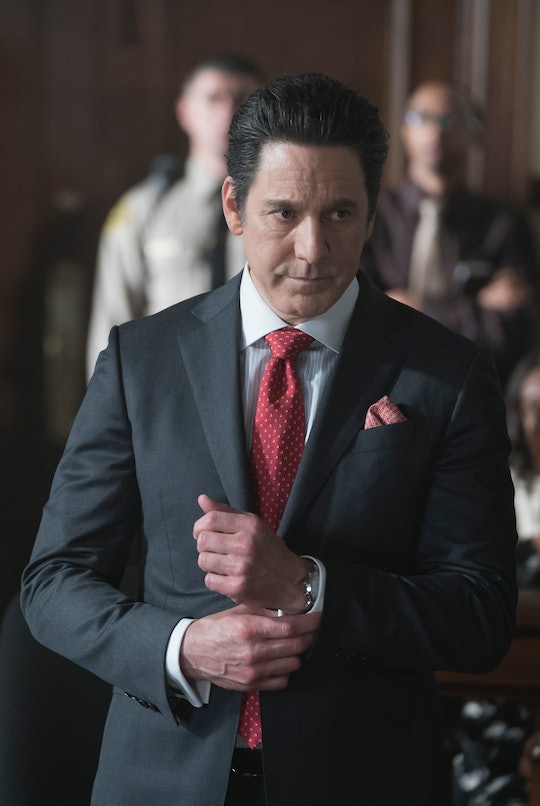 Here's Where You Know Ezra Wolf On 'The Fix' From

One of ABC's most anticipated spring projects is the Marcia Clark-helmed legal thriller The Fix, which premieres on Mar. 18. Co-created and co-written by the infamous prosecutor on the O.J. Simpson murder case, The Fix follows a fictional prosecutor named Maya Travis after she loses the biggest case of her career against a defense attorney nicknamed "The Wolf." The actor who plays Ezra Wolf on The Fix, Scott Cohen, is a seasoned veteran of primetime drama, so he probably looks familiar to viewers.

Most recently, you may have spotted him on Billions as Pete Decker, the former AxeCap employee whom Chuck Rhoades gets to flip on Bobby Axelrod. Cohen was also on the final season of The Americans playing Glenn Haskard, which earned him a SAG Award nomination for Best Drama Ensemble. In the early 2010s, he starred on Necessary Roughness, as well as The CW's ill-fated Sex and the City prequel The Carrie Diaries. But before that, Cohen played Max Medina on Gilmore Girls. He also had a 10-episode stint on NYPD Blue earlier in his career, and has done one-off episodes of Grey's Anatomy and The Good Wife. Needless to say, there are plenty of shows you probably recognize him from, but The Fix puts him in a super high-profile role opposite its star Robin Tunney.

The series opens on Maya eight years after losing the case that killed her career — an A-list actor's double murder trial, which she failed to prosecute successfully. Coupled with the professional fallout of losing the case, getting pilloried by the media led Maya to leave the district attorney's office once and for all. She moved to a quiet, rural area in Oregon, which is where we find her when The Fix begins. But everything is about to change.

The A-list actor who got off on all charges, thanks to Ezra Wolf heading up his defense team, has murdered again, and Maya, with her considerable expertise on the subject, finds herself lured back into her old job. Deadline describes Ezra as "an arrogant pitbull with a thirst for battle," so he's sure to kick up some old anxieties for the former prosecutor, especially since she's stepped away from the high-stakes world of the Los Angeles District Attorney's office for so long.

If you're sensing some massive similarities between this storyline and Clark's own life, you wouldn't be wrong. The series describes itself as "part legal thriller, part confessional, and part revenge fantasy," so there is an element of inspiration Clark drew from her own experience. But she firmly stresses that the series is completely fictional.

"I'm sorry, but you won't learn anything new about me personally," she told TV Insider in an interview last November. "The Fix is a totally fictional imagining of what might happen if the killer who got away with murder the first time winds up charged with murder again — and the prosecutor who lost the first trial comes back to try and bring him to justice this time."

In any case, the show looks super compelling and it'll be fun to watch Clark, who's enjoyed something of a cultural renaissance since Sarah Paulson played her on The People v. O.J. Simpson: American Crime Story, in her new role as TV writer.