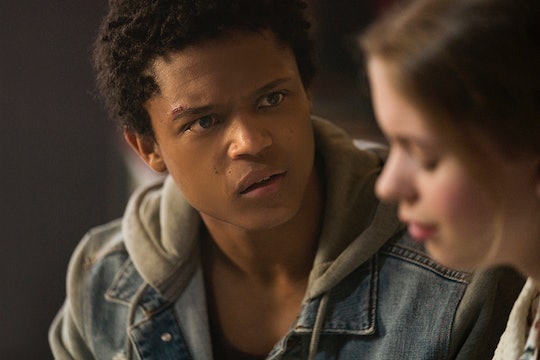 You'll Never Guess How Old Harry From 'The Innocents' *Really* Is

Netflix is killing it in the original series department these days, and The Innocents is no exception to this phenomenon. Fans are buzzing about the show — released on Friday, Aug. 24 — for its well-developed supernatural storyline and compelling lead characters, Harry Polk and June McDaniel. And given the excitement surrounding the new series, it's no surprise people have a lot of questions about it, including who plays Harry on The Innocents. As it turns out, the actor portraying Harry, 25-year-old Percelle Ascott, is an accomplished actor who was drawn to the teenage character because he's admittedly young at heart.

If you're not yet familiar with The Innocents' premise — and sci-fi dramas are your thing — you'll want to pay attention. The series, set against the gloomy yet breathtaking backdrops of Norway and England, follows young couple, Harry and June, as they run away together to escape their controlling families. But things take strange turn when June starts to display shape-shifting abilities, and the two must quickly learn to cope with their dangerous new normal. Making matters even more complicated? A mysterious scientist named Halvorson (Guy Pearce) wants to capture June for research purposes, a threat the young couple struggle with throughout the series' eight episodes.

Although this plot might seem a bit overwhelming, Ascott was thrilled to land the role. He told Teen Vogue:

The first thing I do with any script is read it and try to visualize if I can play the character — if I can feel what the character’s feeling. For me, it was instant. I was so drawn into it and just wanted to read more and more. I fell in love with the character, the journey, and the world and how it’s depicted.

Not to mention, the Zimbabwe-born actor has a knack for playing younger characters. Previously, Ascott starred on numerous British TV shows, including Wizards vs. Aliens, Youngers, and Doctors, to name a few titles. And when Ascott was asked about what it's like to play a teen in his mid-20's, he explained to Teen Vogue: "It’s so funny because I don’t feel like I’m in my 20s. I still feel young at heart. Ultimately, we’re all just big kids trying to become adults." Well said.

Luckily for Ascott, the show's writers spent a lot of time building depth and conflict to the character of Harry, something he appreciates as an actor. When Ascott was asked what he loves most about Harry, he told Brief Take:

I think my favorite part of playing Harry is the conflict that he goes through, which was my favorite aspect of the show. Throughout most of the series he’s struggling to accept June’s condition and ultimately he discovers what it means to really love someone. Love is not this thing that we feel, it’s everything that goes with it. For me, it showed the realistic truth of how we, in our every day lives, would deal with someone who’s a shapeshifter. How would we deal with that and would we say no? I think Harry says no and he struggles to understand it and, in the end, he understands her and loves her for who she is.

You don't have to be familiar with Ascott's name or his body of work to glean his enthusiasm for acting, especially where it concerns young and complex characters. If The Innocents gets another season (at this time, the show's future is TBD) it will be interesting to watch Ascott breathe life into Harry once again. Ascott is a promising actor, after all, and he clearly takes on his characters with a lot of heart.