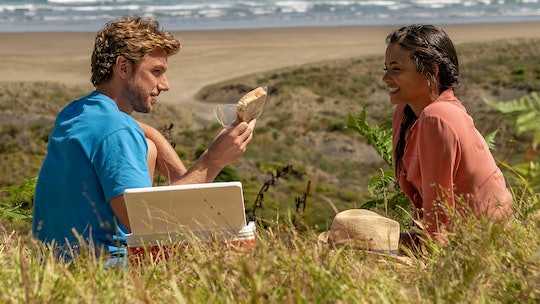 I Don't Think You're Ready To Meet Adam Demos, Who Plays Jake On 'Falling Inn Love'

Romantic comedies and fish-out-of-water stories go together like you and Netflix on a Friday night. So the streaming giant's latest rom-com, Falling Inn Love, should be right up your alley if you're looking to jump start your weekend with 98-minutes of heart-fluttering fun. The new film is headlined by early 2000s queen and "Dip It Low" singer Christina Milian. But since the movie premiered on Aug. 29, all eyes have been on Adam Demos, who plays Jake on Falling Inn Love, and just one look at the actor's face will tell you why.

If you've been wondering where you've seen Demos since the Falling Inn Love trailer was released, don't mistake him for British actor Alex Pettyfer. Although some fans might think the two look alike, Demos is an Australian actor who has been in the entertainment business for about a decade, according to his IMDb profile. Early on, he made a few brief appearances on shows like Home and Away, Rescue Special Ops, and Winners & Losers. Prior to Falling Inn Love, the actor also starred in projects like Janet King as Nate Baldwin. However you probably recognize Demos from his role as August Walker on UnREAL, the scripted series that made fans second-guess The Bachelor franchise.

Given UnReal's dramatic flare, it's nice to see Demos in a true rom-com like Falling Inn Love. And as it turns out, Demos has more in common with his Netflix character than you might think. While Jake is a part-time contractor and fireman from New Zealand, the actor previously worked in construction when he lived in Australia, per an interview with Now to Love. But after working odd jobs in a roofing company, demolition, and steelworks, Demos decided he wanted to pursue a new career.

"I started doing beginner's acting courses in Sydney," he told the publication. "I'd tell my mates I was working overtime on a job. The acting world was so foreign to our upbringings."

Nevertheless, Demos went for it, and now, here we are. Fans are probably happy the construction worker-turned-actor made the leap. However, it's quite possible no one is as happy as Milian, who gushed about working with Demos when speaking with Entertainment Weekly. She said:

Adam’s a great guy. He and I had great chemistry on screen and he’s just such a cool guy. I was in pretty much — wait, not pretty much — I was in every scene of the movie, and there’d be some days when I was just exhausted and he’d come into work and you’d just hear his happy voice on arrival. Having somebody that’s just so nice, appreciative and has such good energy is infectious. It’s a good reminder that your mood sets off a lot of other people’s moods, you know? He’s really cool and subtle about his comedy too which is perfect because too much dadumdumdum or the romantic stuff could turn out really sappy.

Quite frankly, Milian's high praises of Demos' acting chops are so adorable, I can hardly wait to see how their chemistry plays out on screen. I'm sure it'll be enough to make every viewer "fall in love" with Falling Inn Love.