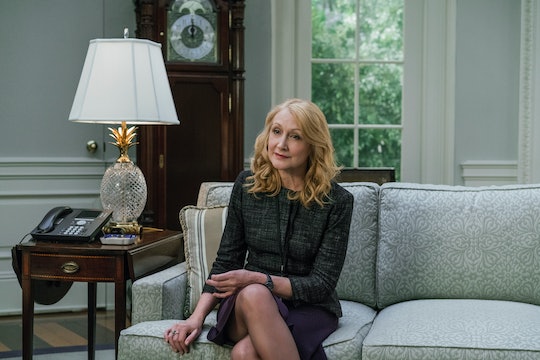 Praise be to Netflix. Not only has the streaming giant given me many, many hours of couch potato joy, it's also reintroduced me to some of my favorite actors. Winona Ryder in Stranger Things, Naomi Campbell and Robin Wright in House of Cards. In fact, that show in particular just keeps the hits on coming, because another stellar actress recently joined the cast. If you thought Jane Davis on House of Cards Season 5 looked familiar, you've been lucky enough to see the luminous Patricia Clarkson before. Warning: spoilers ahead for House of Cards, Season 5, Episode 7!

Clarkson is introduced during Episode 7 as Jane Davis, Deputy Undersecretary of Commerce for International Trade. Davis arrives on the scene to meet with Acting President Claire Underwood (it does have a certain ring to it, no?) and Secretary of State Cathy Durant. The three women sit down in the Oval Office to discuss trade agreements. It did my old feminist heart good to see three women in the Oval Office, even it was fiction. Of course, the moment had to be ruined by a potential truck full of radioactive material that went missing. Meeting ruined (thanks, patriarchy), the president is moved to the bunker to figure out contingency plans and strategize. Davis is a background character, a fly on the wall... until she isn't any longer.

As the NSA and the White House work to find where the missing truck with the potential dirty bomb might be heading, Davis tells Durant that she might have connections... better connections than the White House. "Third party contractors who have negotiated with ICO," she says. Despite apparently dealing with several neuroses like claustrophobia and hypochondria, Davis gives the impression (even to the famously unflappable Doug Stamper, who she clearly unnerves) as being a woman who knows what's what.

"I've made a career out of dealing with problematic parts of the world," she stated.

All in all, Patricia Clarkson's turn as Davis makes an indelible impression. Something Clarkson should be accustomed to by now. The 57-year-old New Orleans native has been acting for over 30 years, making the leap from Broadway to the big screen in Brian DePalma's Oscar award-winning 1987 movie The Untouchables. Since then, she has given one critically acclaimed role after another — as a 50's housewife in Far From Heaven, guest starring on HBO's Six Feet Under, and recently starring in Martin Scorcese's Shutter Island. One of my personal favorite Clarkson roles; 2009's Cairo Time.

I have a feeling one of my new favorite Clarkson characters will be Jane Davis. As she offers to help Claire near the end of the episode, even the acting president is aware she is going to be a force to be reckoned with. As Frank Underwood says, "She's attractive and terrifying."