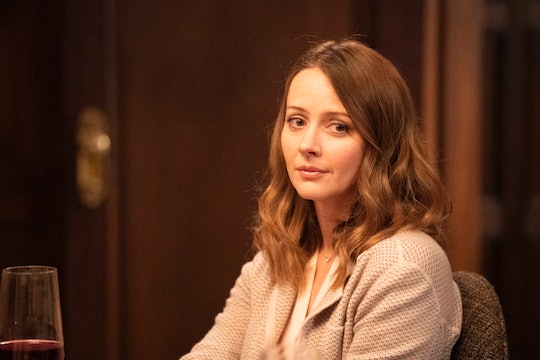 Derek has been gone for years now on Grey’s Anatomy, but all of his sisters have made an appearance at some point, and now that includes his fourth sister, Kathleen Shepherd. She will appear in the upcoming April 11 Amelia-centric episode, but until now, she has only been talked about and never seen. It means that the actress who plays Kathleen Shepherd on Grey’s Anatomy, Amy Acker, might have some big shoes to fill, but something tells me she is up for the task. Acker has been in a lot of TV shows over the years, both in one-episode roles and longer more permanent parts. If you were ever a Buffy the Vampire Slayer or Angel fan, then you might know Acker as Fred from Angel. But she was also in Dollhouse, Happy Town, and Person of Interest.

Most recently, Acker took on the role of human mother to mutant children Kate Strucker in Fox’s The Gifted. She definitely has the experience as an actress to take on the role of Kathleen Shepherd on Grey’s Anatomy, but she’s no stranger to the challenges that come with taking on different kinds of roles. She recently told Collider that playing Root on Person of Interest was a highlight of her career, if only because of the way it forced her to learn about something she was otherwise unfamiliar with.

"I've worked with such amazing writers that have made these characters, and then I’ve gotten lucky to play them. Maybe it’s because it’s the most recent, but playing Root was a turning point [in my career]," Acker said. "I am not computer savvy. It was fun to get to do a lot of research on that character… That whole experience was challenging. It was the most challenging and the most rewarding."

In real life, Acker is married to actor James Carpinello with whom she has two children. They also have an adorably shaggy dog named Wally and two new puppies named Penelope and Buddy, which is kind of awesome and just ups Acker’s cool factor. Judging by Instagram, Acker loves to travel, cook, and spend time with her family when she isn't busy working on The Gifted or taking on other TV roles. She’s also prone to taking pictures of her meals, but that’s probably because she prides herself on being a good home cook and you can't be mad at that.

She honestly seems pretty down to earth for an accomplished actress who has been in the business for years. She recently went on an escape room date with her husband and I basically want to go on a double date with them now.

Acker will likely be on Grey’s Anatomy as Kathleen for just one episode, but there’s probably a reason why she hasn't yet been introduced to the show. The few times Meredith has mentioned her, she hasn't had the warmest things to say about Derek’s other sister and once noted that she wouldn't want to hang out with Kathleen on a long-term basis. Derek’s other sisters who have appeared on the show, not including Amelia obviously, never really got close to Meredith or her children, so chances are, Kathleen won’t have a very good bedside manner with it comes to Amelia.

Caterina Scorsone, who plays Amelia, told TVLine that the upcoming Amelia episode of Grey’s Anatomy is going to be important for her character and more than just a day in the life of Derek’s little sister.

"I've been doing the show for a long time and just hearing what [the episode is] about fills me with nervous excitement," Scorsone said. "It’s not just, 'Let’s follow Amelia to the neuro lab.' It's definitely a little standalone. It’s almost like a little movie on its own."

Although Acker is set to appear in just one episode, it's definitely going to be interesting to see how the two actresses interact as sister's who probably aren't very close.