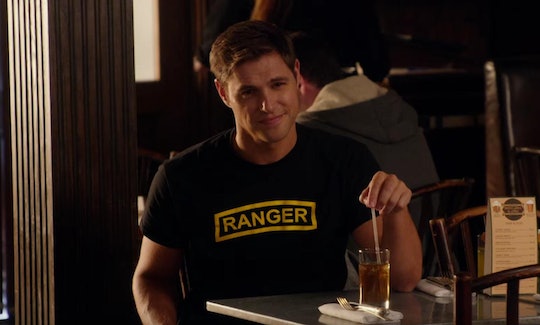 Who Plays Keith On 'Unbreakable Kimmy Schmidt'? Sam Page Needs To Be A Series Regular

Among all of the other guest stars set to grace our Netflix-fueled screens during the Season 2 of Unbreakable Kimmy Schmidt, there is the little matter of Kimmy's new love interest to address. Seen in the Season 2 trailer, and referred to as "a really cute guy" Kimmy met in the restaurant where she pees (obviously, right?), Sam Page will be playing Keith on Unbreakable Kimmy Schmidt, a new love interest for the title character. If you're asking yourself, "exactly who is Sam Page?" I don't blame you. Chances are you know him from something, and even if you don't, I think we can all agree that his hunk status will make a lasting impression.

While you're marathoning Unbreakable Kimmy Schmidt, you might be wondering how much of Keith you'll be seeing on the show. His episode is brief — Kimmy brings him to a bougie event after meeting him at a bar — and it might just be the only episode we get from him. But, that doesn't mean we can't be interested in where he's from and what else he has going on in his career. Plus, it's nice to see Kimmy find a new love interest. If anything, he's a great way to distract us from the Dong storyline.

So what else has Sam Page been in before becoming Kimmy's love interest in Season 2 of Unbreakable Kimmy Schmidt? Let's take a look back at his track record as we try to figure out his staying power in the series.

He's Super Down To Earth

From the look of his Instagram, Page makes it abundantly clear that despite his success and, ahem, face, he's just an every-man.

He Went To Princeton

That's right, Page has got that whole good looks and brains thing going on, which can never really fail you. Before you go and claim that he skirted through college as a drama star and not much more, you'd be very embarrassingly wrong. In fact, Page never once took part in performing arts at Princeton, and instead majored in Biology and concentrated on his studies and playing on the baseball team. That's right — your boy was a brainy jock.

Remember when Page played Joan's awful and abusive husband early on in the show? I know, how could you forget, right? Unfortunately, that makes him super memorable, but maybe it's just because such a sweet looking dude plays such an awful one with such ease, right?

He Has Quite The Resume

With a resume that includes the likes of Gossip Girl, Switched At Birth, Desperate Housewives, and House of Cards, it's safe to say that Page has enough of a range of talent to do great things as Kimmy's new lover interest, however Dong-like or Logan Beekman-like he turns out to be.

In 2014, Page married longtime love Cassidy Boesch and took to Instagram to be as down-to-earth, normal, mushy, and in love as he could be. Which, okay, kind of just makes him even more lovable.

Page is a welcome change on the show. Let's hope he isn't a stranger for the rest of the series.