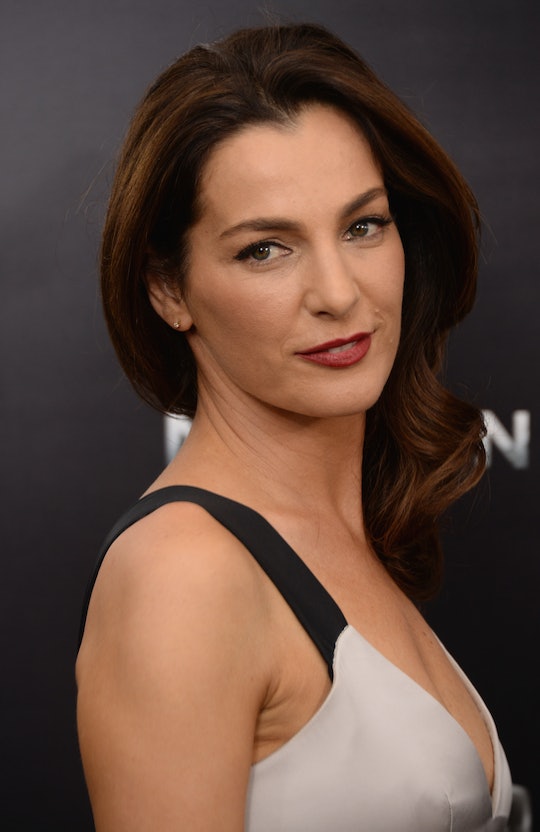 After a long winter break, Legacies is back, and the new mid-season premiere is bringing viewers closer to the truth about Malivore. After initially seeing a just small photo of her in Episode 5, fans are finally getting to meet Landon’s mom, Seylah, who is somehow linked to the mysterious place. The actress looks awfully familiar, so some fans are wondering, who plays Landon’s mom on Legacies?

Ayelet Zurer an Israeli actress, and if she looks familiar, it’s probably because she has had a number of notable roles in TV and film over the years. You may recognize her from her most recent recurring role as Vanessa Fisk (Kingpin’s wife) on Netflix’s Daredevil. You might also remember her from Angels & Demons, in which she played scientist Vittoria Vetra, or from Man of Steel in which she played Superman’s biological mother, Lara Lor-Van.

On Legacies, Zurer plays Seylah, Landon’s long lost mother, who gave him up for adoption when he was a baby. The only thing Landon knew about his mom was from a photograph he had, in which she’s wearing a necklace with the Malivore symbol. With Hope’s help, he found his mom working at a coffee shop, but when he first introduces himself, you can tell that Seylah is uncomfortable. I have a strong feeling she has something to do with Malivore, but it’s still unclear what the connection is.

During the winter finale, the Necromancer described Malivore as a hellish void for evil beings, created to “wipe the scourge of the supernatural” off the face of the Earth. He told Hope that Malivore had three locks which kept it shut, with the ancient knife being one of the keys. After the Necromancer successfully destroyed the knife, there are still two keys remaining, and it’s possible that Seylah knows exactly what (or who) they are.

After seeing Seylah with the Malivore necklace, there’s a good chance that she’s connected to its history, but does that mean that Landon is connected too? He has no apparent supernatural abilities, and when Hope tested him in Episode 5, he didn’t have a trace of super powers in him. However, he is immune to compulsion, he was the first person who ever tried to steal the ancient Malivore locking knife, and he unknowingly unleashed a plethora of supernatural beings on to the school. I think Landon definitely has a link to the supernatural world, Malivore more specifically, and that could be the reason his mom gave him up for adoption.

But now that he is reunited with his mom, viewers should get more answers about his family and his past. If Landon tells Seylah about his recent supernatural experiences, it’s possible she starts dropping clues about their connection to Malivore. For Landon’s sake, I hope Seylah turns out to be a good guy, because it would suck to finally meet your biological mom and find out she’s evil. Maybe they are the protectors or guardians of Malivore, who knows? But it’s safe to say, that with Seylah finally in the picture, fans will be getting more answers soon.