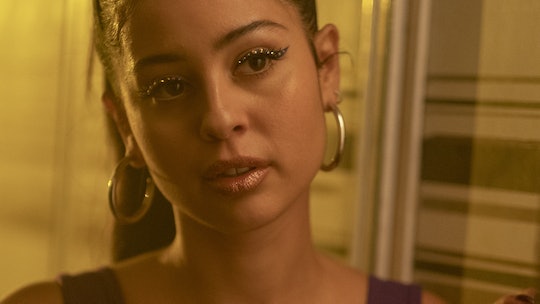 Alexa Demie, Who Plays Maddy On 'Euphoria,' Is A Star In The Making

Although HBO's racy teen drama Euphoria is headlined by big names like Zendaya, there are a number of newbies in the supporting cast, including Alexa Demie, who plays Maddy on Euphoria. Since her debut in the new teen drama, Demie has charmed her way into the hearts of fans, and they're dying to know more.

According to Demie's IMDB profile, the young starlet has been acting since 2015. She appeared in small roles on Showtime's Ray Donovan and Netflix's The OA. You may also recognize her from the 2018 coming-of-age film, Mid90s, which was written and directed by Jonah Hill. The 24-year-old actress is also set to star in upcoming projects such as Waves, Mainstream, and the short, Nineteen on Fire.

Per V Magazine, Demie is a multidimensional threat in the entertainment industry. Not only is she heavily involved in music, but she has a strong entrepreneurial streak of her own. The publication revealed that Demie is a singer-songwriter who has already released her debut single, "Girl Like Me." The Euphoria actress also directed music videos, made costumes for Nicki Minaj, and had a Japanese-backed sunglasses line that were featured in Vogue Korea. Seriously, even the tiger mom in me is impressed.

In an interview with W Magazine, Demie explained that she was always destined to have multiple careers. However, it wasn't until she was cast in her friend's short film that she considered acting seriously. Although the film was never made, the stars eventually aligned for her casting in Euphoria.

Demie shared that she auditioned for an Augustine Frizzell directed film a year prior to Euphoria. The actress didn't get the role, but Frizzell reached out for another project.

"She emailed me and said, ‘I love you, we are going to work together.’ A year from that date, she emailed me about Euphoria," Demie said. "At the time, I was so discouraged about acting because I wasn’t getting any scripts that I loved. I am very particular about the scripts I chose to do, because you are giving so much personal energy that you have to be careful. I thought I would take a break from acting and make music, and then I got the Euphoria script and I knew I had to be a part of this."

Now that Demie is settled into her Euphoria character, fans can see that the actress was born to portray Maddy. That said, the HBO star admitted that her character took some getting used to. She told W Magazine:

Maddy pulls me out of my comfort zone. Even the way I dress, I don’t really wear skirts — I’m more tomboy. She wears whatever the hell she wants, and I love that. I got to explore this other side. But with all the sex and volatile relationships, that's so not me, and that was one of the hardest parts, to be vulnerable in that way. Even with the nudity — I don’t know if you’ve seen my Instagram, but it’s mostly portrait shots. I don’t post bikini pictures. I’m just not that way. I don’t judge anyone that is — sometimes I wish I was more free in that way—but it was a challenge.

Demie might be a fresh face in the entertainment industry, but judging by her performance on Euphoria and her passionate drive, she has the skills to launch into stardom in no time.