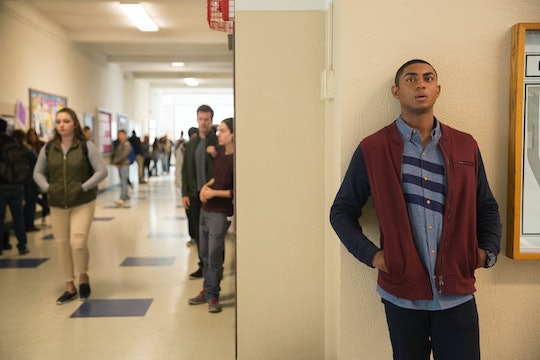 Marcus On '13 Reasons Why' Is An Up-And-Coming Star

Everyone has to start somewhere and while the actor who plays Marcus on 13 Reasons Why isn't brand new to the world of acting, Steven Silver's only other acting credit on his IMDB page is for the 2011 short, The Problem with Mr. Withers. Silver was cast as Marcus who, if he’s anything like the character of the same name in the book, will find him playing a part in why high schooler Hannah Baker chose to end her life.

There isn’t a whole lot to go on as far as Silver’s life outside of 13 Reasons Why, but he seems to be almost as excited as fans are for the upcoming Netflix original, which is based on the young adult book of the same name. The description Silver has written in his Instagram bio is: "Houston raised, Miami glazed, living in the LA haze. Actor. Cupcake Goon/connoisseur. Owner of awesome last name."

Obviously it’s hard to argue with the claim about his last name, because how perfect is that? But the description itself shows how totally down to earth the actor is. And, in a promo for Marcus on 13 Reasons Why, Silver is already showing off some major acting skills with his voice alone.

In some of the photos Silver has posted in regards to wrapping up Season 1 of 13 Reasons Why, he captioned them with tons of accolades for his co-stars while showcasing obvious excitement for the show in general, which is totally endearing. Under one, Silver wrote: "Yesterday we wrapped Season 1 of #13ReasonsWhy, filling my heart with so much gratitude and joy just in time for the holidays. Every crew member and every cast member has made this experience a dream for me. I couldn't have asked for better people to go on this journey with.... honestly. Shout out to our amazing PASSIONATE leaders."

Creating a series about something as serious as a teenage girl’s suicide and those around her who may have played a role in her decision, is not only important work, but it’s also got to be hard to get the right feelings across to viewers. Although this is Silver’s first major TV role, and biggest role of his career so far, he seems totally capable of tackling such an important project.

It’s unclear yet if there will be a second season of 13 Reasons Why or how it would work, but Silver definitely seems like he’d be game to keep the momentum rolling.