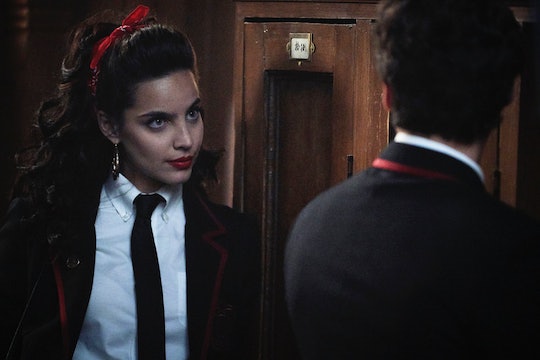 Deadly Class is like the TV version of X-Men: First Class, complete with teenage heroes and villains and a coming-of-age concept that’s sure to set it apart from other superhero shows. Except in this case, the heroes aren't mutants so much as misfits who are training to become deadly assassins. Before you get too deep in the teen angst, however, you’re going to be wondering who plays Maria Salazar on Deadly Class, because Maria Gabriela de Faria definitely hits it out of the park.

To be fair, all of the young actors picked to play the TV versions of the graphic novel characters probably couldn't have been chosen better — but Maria is such a unique character! With a tragic backstory as someone literally forced into the life of training to be an assassin, she uses a technique referred to as "dance fighting" in descriptions to lure in her opponents. She typically ends the fights by slitting her enemies' throats. It's all in a day’s work I guess.

Judging by the trailer for Deadly Class, Faria might have been born for the role with the way she pulls off every sardonic one-liner. With no prior fighting experience, the assassin-bit was new territory for her, but acting in general is not. In the past, she’s starred in the Nickelodeon Latin American comedy Yo Soy Franky and the period drama, Besieged, among many other TV shows. Deadly Class, however, is her first major foray into American television and it marks a huge step in her already successful career.

In an interview with Brief Take, Faria revealed that while she had no experience fighting before Deadly Class, she already had the dance experience needed to help round out her character. "[Producers] came to me and asked me questions about all the dancing," she said. "Rick [Remender, Deadly Class executive producer] would say to me, 'What do you think that Maria likes to hear on the radio? What do you think she dances to?' And that was really cool because I got to really be a part of the creative process of my character, and that doesn’t happen often."

Despite Faria already having begun her acting career long before Deadly Class, she still recognizes the opportunity it provided her. "The thing about this cast is that we are all so grateful to be doing this, because we know how great this opportunity is," Faria told Brief Take in the same interview. "We all have the same goal, you know, which was to make an amazing TV show for everybody and to really give the fans of the comic what they wanted. And I think we did it."

Outside of acting, Faria spends most of her free time with family and friends, including her fiancé, Christian McGaffney, who starred on Yo Soy Franky alongside her. She also has a special place in her heart for animals and in the past has posted on Instagram about animal cruelty. There are a handful of photos of her two cats who will make you want to go out and expand your own fur family stat, so be warned.

Deadly Class premieres on SyFy on Jan. 16 at 10 p.m. ET and although Faria might be a new face for some viewers, it's clear that her career is about to take off big time. She’s already gained a solid following thanks to her previous work and now that she’s helping to usher in a new generation of comic book fans, Faria might soon be your new favorite anti-superhero assassin.