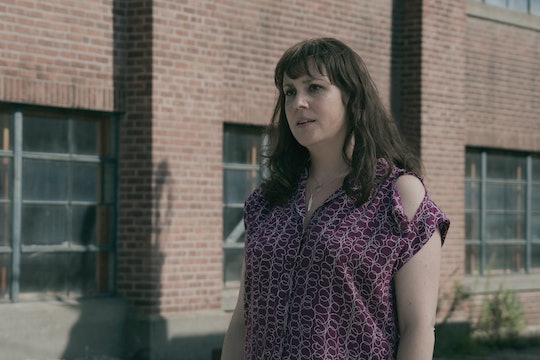 Molly's Story On 'Castle Rock' Is Just Getting Started

Hulu's new thriller series, Castle Rock, takes viewers into the world of Stephen King's novel and novellas. Set in the fictional town of Castle Rock, Maine, there's a lot going on in this world that is strange and terrifying, which begs the question why would anyone live there? Every one in town has there own reasons for being there, including Molly Strand, a real estate agent with a rare medical condition. If you've been watching the show Molly may look familiar to you, so who plays Molly on Castle Rock? Melanie Lynskey scored the role.

Lynskey first came to fame when she played Pauline Parker alongside Kate Winslet in the Academy Award-nominated film, Heavenly Creatures, in 1994. Lynskey was only 16 at the time. Since then Lynskey has gone on to have a number of notable roles in films and television. On the big screen she appeared in Ever After: A Cinderella Story, Coyote Ugly, Sweet Home Alabama, The Perks of Being a Wallflower, and Sadie. On TV Lynskey's had roles on Psych, The L Word, It's Always Sunny in Philadelphia, House, Key and Peele, Girlboss, and Wet Hot American Summer: Ten Years Later. She also starred in Two and a Half Men and Togetherness, before landing her role as Molly on Castle Rock.

When the show premiered on Hulu, the first three episodes of the series dropped. Though Molly appeared in the first two episodes, it wasn't until episode three where viewers really got to know Molly. The episode, "Local Color," dived right in with a flashback to when a young Henry Deaver was missing and a young Molly unplugged Henry's father's breathing tube in his home, killing him.

If this was any other show this straight up murder at the hands of a kid would've been more shocking, but this is Castle Rock and Molly killing Henry's dad is honestly the least terrifying thing going on here. Prior to this episode, it was revealed that Molly has psychic abilities, which are linked closely to Henry, so she pretty much knows exactly what's going on with Henry when he returns to Castle Rock in the present day. Henry, on the other hand, has no idea she killed his father.

In the present, Molly was dealing with a number of issues. First, her house was broken into and it looked like whoever did it was looking for something. However, this was less of a daunting problem compared to Molly succumbing to her psychic abilities, which were making her lose her mind. She decided she needed more drugs to get through it, but her regular dealer was unavailable so she was sent to someone else. This was where things got quite weird.

Somehow Molly stumbled upon kids doing some kind of mock trial who turned on her, calling her "the real murderer," and then chanting, "Guilty!" To top it off, the police then arrived to arrest her for attempting to buy drugs. Thankfully, Henry bailed her out and though she still didn't confess to killing his dad, she did reveal that she believed their connection is only growing stronger. Though Henry wasn't fully on board, he wasn't totally dismissive either. This is Castle Rock after all; anything's possible.

Henry arranged for Molly to be taken on Local Color, the town's local TV show, where she suddenly went on a rant against Castle Rock authorities, sighting The Kid as an example of their misdeeds. She called out the authorities for holding him hostage in Shawshank Prison without a formal arrest or trial, which will most likely give Henry the platform he needs to set The Kid free, whether he actually should or not. As for Molly, it seems like it's only a matter of time before her guilt about killing Henry's dad finally catches up with her.