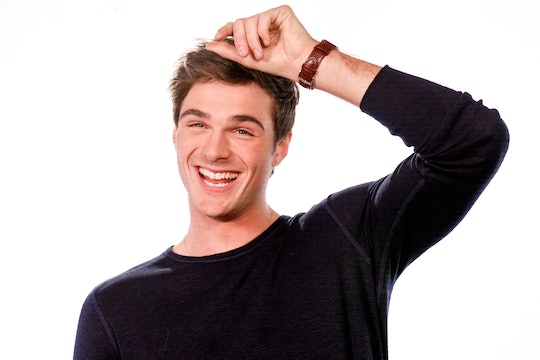 For the love of all that is pure, do not mistake HBO's Euphoria for Jungkook's recent viral video by the same name. That is, unless you want your innocence to be swept away right under your nose. On Sunday, Jun. 16, the premium cable network released the new teen drama, which has already generated quite the buzz surrounding its use of explicit content. That said, you still might be shocked by the show's casting choices, including Jacob Elordi, who plays Nate on Euphoria. As fans may have noticed, Elordi's best-known role is a far cry from his HBO counterpart.

If you're a fan of the teen romance genre, then there's a big chance you've seen Elordi before. According to his IMDB profile, the Australia actor has been in a few small projects since he entered the entertainment industry in 2015. Elordi previously starred in Carpe Liam, Max & Iosefa, and Swinging Safari, but he landed his breakout role as Noah Flynn in Netflix's rom-com hit, The Kissing Booth, opposite Joey King. With Euphoria's release in 2019, the 21-year-old actor is staying busy with numerous films on the horizon, including 2 Hearts, The Mortuary Collection, The Very Excellent Mr. Dundee, and The Kissing Booth sequel.

Although Elordi made strides with his part in The Kissing Booth, the actor didn't have quite the resume when he went out for his role in the HBO teen thriller. In an interview with Wonderland magazine, Elordi reminisced on his audition for Euphoria.

“I had no money, I didn’t have anything, I was practically homeless in LA — and I went to the casting and I forgot my lines,” Elordi said, per Just Jared. “I had no name, I had no backing, you could not find any video of me acting anywhere. I was just a child, and they cast me. I was quite lucky.”

Elordi also reflected on how he viewed his character, Nate.

“What I thought he was when I auditioned, to what we finished with character-wise, I never could have hoped or dreamed for anything as brilliant or as engaging," Elordi said.

Given the gritty nature of Euphoria, there will definitely be a stark difference between Elordi's role on The Kissing Booth and the HBO series. Speaking to Entertainment Tonight at the Euphoria live premiere, Elordi explained what it was like to play Nate in the project.

"It was a real dream. Everything that I've always wanted to make is everything this show is. So I'm so grateful to be here," the actor said.

Elordi also shared what he learned from playing such an intense role. "I learned a lot about myself," he said. "I sort of had to readjust and make myself a blank canvas coming in to play the character because he's so different to who I am as a person."

Elordi's part as Nate might be a worlds away from his previous roles, but Euphoria's unique portrayal of sexuality, drugs, and violence will definitely have everyone talking.