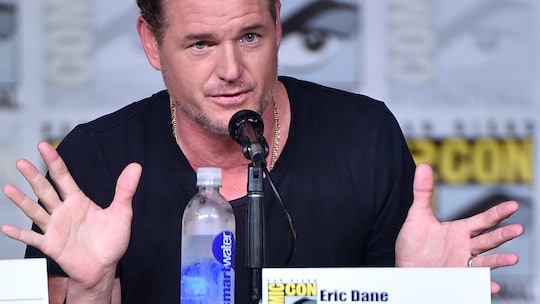 It can be difficult for fans to separate actors from their previous roles, but HBO's Euphoria managed to create a fully immersive world that doesn't take the viewer out of the experience — no matter how many high-profile talents they use. From The Disney Channel's Zendaya to The Kissing Booth's Jacob Elordi, there's a chance you've seen at least one familiar face on the new teen drama. But given the show's excellent storytelling and characterization, you may not immediately recognize the actors, including Eric Dane, who plays Nate's dad on Euphoria. As any Grey's Anatomy fan would know, Cal Jacobs is a huge departure from Dane's best-known role.

According to Dane's IMDB profile, the 46-year-old actor has been in the entertainment business since the early '90s. Early in his career, Dane starred in a number of small roles, including brief appearances as Dr. Wyatt Cooper in Gideon's Crossing and Jason Dean in Charmed. However, the San Francisco-born actor got his big break when he became Mark Sloan — aka McSteamy — in the Shondaland medical series, Grey's Anatomy. Dane was on the hit show for six long years until his character died as a result from the infamous plane crash. But, he then headlined a drama of his own as Tom Chandler on TNT's The Last Ship.

In Euphoria, Dane plays Cal Jacobs, a married man who commits statutory rape with a transgender teenager in the second episode. The scene in question also involved full-frontal nudity and a fully erect (prosthetic) penis. In an interview with Entertainment Weekly, Dane shared what it was like to film the scene. He explained:

Those scenes are very difficult to shoot. It helps to have one voice in your ear. One voice that you can express your feelings to, and somebody that is an advocate for the actors. It just simplifies a lot of things and makes for a safe and comfortable environment while shooting something that is fairly uncomfortable to shoot. And certainly, the stuff that we did in the pilot is no exception. It’s a pretty intense scene.

The actor then confessed that he wanted to do everything in his power to tell the story correctly.

“I’m willing to do anything that’s critical to the story and crucial to creating a very real and truthful feel to how the story is gonna go down," he said, clarifying that you couldn't shoot the scene without showing nudity.

"It kind of matches the stakes," Dane continued. "The stakes are so high, you can’t hold anything back, really.”

Although Dane's new role has been a horrifyingly creepy departure from his portrayal on Grey's Anatomy, Dane admitted that he embraced the change.

“I just got tired of playing characters that appear to be the right fit,” Dane explained, still speaking with EW. "Sam [Levinson] is such a strong writer. He’s got such a unique and articulate vision. I felt like if I were going to play a role like this, then I was in really good hands.”

The actor also revealed that the script prompted him to try something new.

"I read the pilot and it was wonderfully written and it was fresh and it was unique and it was unapologetic," Dane said. "And at this point in my career I need to do something different. Who wants to see me play the same guy over and over again?"

I'm sure Grey's Anatomy would love to see Dane return as Mark Sloan, but it's pretty clear that the actor is ready to move onto a new chapter. And to be honest, I'm kinda here for it — no matter how dark it gets.