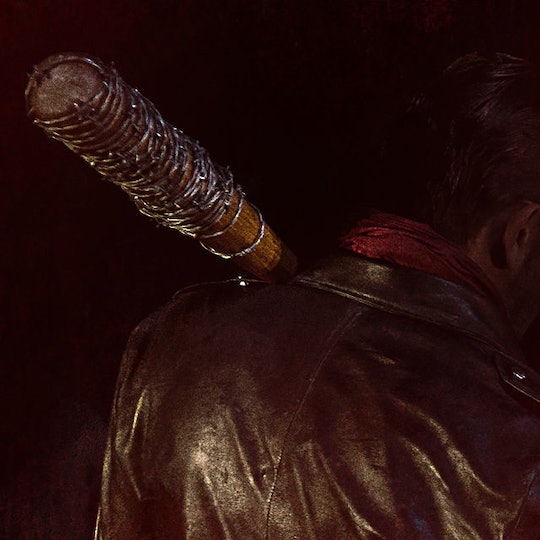 Who Plays Negan On 'The Walking Dead'? Jeffrey Dean Morgan Is Preparing For Distruction

The lead-up towards revealing Negan on The Walking Dead has been building tensely for a while. As a well-known threat from the comic series, some fans have been aware of and waiting for him for years, knowing that he's going to sow some serious discord but looking forward to it anyway with a kind of stomach-churning certainty. Finding an actor who could mix Negan's blend of terror-inducing menace and unsettling charm was a tall order, but it seems the series has succeeded with their choice. Since you haven't seen him yet (and in case you haven't heard by now), you must be wondering: who plays Negan on The Walking Dead?

Actor Jeffrey Dean Morgan has been chosen to portray Negan. Recognizable thanks to his memorable television work (and a stunning resemblance to Javier Bardem), Morgan is a familiar face that might seem a surprising choice if you remember him mostly as the dreamy, dead Denny on Grey's Anatomy. Morgan has been steadily working since the early '90s in both television and film, turning in one strong performance after another. He had a mini-television takeover in 2005-2006 when he appeared in three different shows at once. He made his mark simultaneously on Grey's Anatomy, Supernatural, and Weeds, in addition to all of his other TV work, making it nearly a guarantee that you've seen him on your screen at least once before. Morgan seems like something of a workaholic, recently appearing on Extant with Halle Berry and currently on The Good Wife. Does the guy ever sleep?

Luckily, Morgan also has experience bringing iconic comic book characters to life. In Watchmen (2009), Morgan played The Comedian, the antihero of the graphic novel who has a dark outlook on society and kills without prejudice. That seems like a fair bit of experience for playing Negan, who is known for being brutal, imposing, and charismatic in equal measure. Negan rules his enclave with an iron fist – or, rather, bat – and is smarter, crueler, and less concerned with ethics than any villain Rick's crew has faced yet. He is the catalyst for a lot of change about to hit the world of The Walking Dead, including one of the show's biggest debates: rebuilding society in a universe where all the rules have gone out the window.

Promotional work is definitely playing into the iconic scene that every fan in the know is dreading and looking forward to in equal measure: the one where Negan murders a main character with his signature weapon, Lucille. In the only released pictures so far, Negan's face has been cropped out or obscured with a heavy focus on Lucille, the barbed wire-wrapped bat he uses as a weapon and treats lovingly enough to name. His first appearance promises to live up to all the hype, with lead actor Andrew Lincoln telling Entertainment Weekly, "I read the script and I went, ‘This is the greatest entrance ever written.’"

Lincoln went on to discuss what a great guy Morgan is in real life – and what a drastic departure from the character he'll be playing. Despite that, it looks like he's the perfect person for the part, making his upcoming appearance all the more exciting.