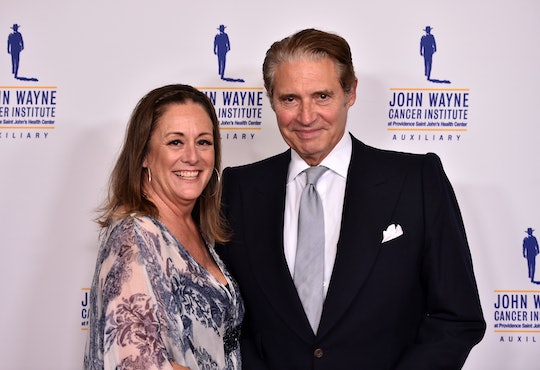 If you're tuning in to the new episode of The Assassination of Gianni Versace on Wednesday, you will be introduced to Andrew Cunanan's ex Norman Blachford, a retired millionaire who funded Cunanan's life of luxury in the year before the murders started. But who plays Norman Blachford on Versace and why does he seem so familiar? You've definitely seen him on your screen before.

Blachford is played by Michael Nouri. If his name doesn't spark anything in your memory at first glance, perhaps one of the 126 credits to his name will give you a flash of recognition. He's been working in film and television since the late 1960s, so it's almost a guarantee that you're familiar with at least some of Nouri's work. His role on Versace is just the most recent in a long list of projects.

Nouri might be most famous for playing Nick Hurley in 1983's Flashdance, but his memorable roles don't stop there. He's been on quite a few popular TV shows, snagging multiple episode arcs on The Young and the Restless, The O.C., and Brothers & Sisters. In the last decade, he's popped up on TV in Damages and NCIS. Now he'll be tackling the part of an important person from Andrew Cunanan's past.

A 2004 profile in the Observer detailed Nouri's childhood and journey into acting. He was raised in Alpine, New Jersey and Manhattan, attending an all-boys boarding school in Connecticut before heading off to two different colleges: Rollins in Florida and Emerson in Boston. He started acting on Broadway in 40 Carats alongside Julie Harris before making the jump to film with Goodbye, Columbus. After that it was soap operas and TV shows until Flashdance. Of the experience, Nouri told the Observer:

It was big. We can't all have these blockbuster movies. I've had one Flashdance in my career. As I get older, having been in the business for three decades, it's more about gratitude, it's about being grateful for that has come my way.

Nouri has been married twice, to Vicki Light and Lynn Goldsmith, and has two daughters named Jennifer and Hannah; he was also engaged to actress Roma Downey, per The New York Times. In 2012, TV Guide reported that Nouri had been arrested on suspicion of felony domestic violence after police were called to the home he shared with his girlfriend.

E! News elaborated on the charges, stating that Nouri had also been booked on false imprisonment and obstruct use of a wireless device, meaning he had allegedly stopped his girlfriend from using the phone to call for help. Nouri was released on bail and, according to Radar Online, he later pled no contest.

He was served a protective order until Jan. 30, 2014, but in 2013 Judge Marsha Revel dismissed all of the charges for unspecified reasons. Nouri's rep Steve Jaffe said, "This is the kind of case, if it didn't involve a celebrity, would not even be reported in the press." (Which, probably unintentionally, points to how widespread domestic violence is, and the lack of public attention given to it.)

As Norman Blachford on Versace, Nouri plays an older man who met Andrew Cunanan in the mid-90s and became both romantically and financially involved with him. They lived and traveled together for a year, with Blachford supporting Cunanan during that time. That included a monthly allowance and new car, as well as trips and even a new house. Eventually, Cunanan's demands exceeded what Blachford was willing to give and they separated. Not long after, Cunanan's spree began.

If you find yourself wondering about Nouri while you're watching, then it's probably Flashdance that you're thinking of — but if not, there were plenty of other projects you might have seen him in.