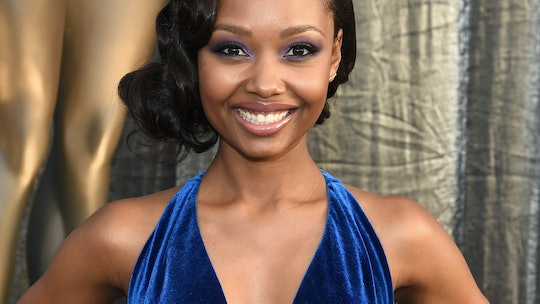 A new season, a new walking companion. When Hulu's The Handmaid's Tale returned for its third run, fans met a variety of unfamiliar faces, including Ofmatthew, June's latest walking partner. As always, viewers were a little suspicious of the character's devotion to Gilead, but unlike Emily and Lillie — aka the second Ofglen — Ofmatthew actually proved herself to be "a pious little sh*t." That is, until she showed a bit of her humanity in "Unknown Caller." With the new handmaid's characterization deepening with every episode, fans are wondering who plays Ofmatthew on The Handmaid's Tale. Ashleigh LaThrop definitely has the acting chops to create more unforeseeable layers in this dystopian tale.

According to LaThrop's IMDB profile, the actress hasn't been in the game for too long. Her credits begin as early as 2014, but she has been involved in a number of projects ever since. Before LaThrop secured her recurring role on The Handmaid's Tale, she played Gabby in Sirens, Devin in You're So Talented, and Breana in The Kominsky Method. You might also recognize her from the Fifty Shades franchise as Hannah. More recently, LaThrop has been starring in The CW's The 100. She has also been cast in Utopia, Amazon's latest British drama. So expect to see more from her soon.

From a fan's perspective, LaThrop's role as Ofmatthew on The Handmaid's Tale has been complicated to say the least. Although she has shown June glimpses of empathy, she also has a seemingly questionable devotion to Gilead. In an interview with Brief Take, LaThrop walked fans through her understanding of Ofmatthew.

Naturally, the actress found it interesting that Ofmatthew could be so devoted when she was so oppressed. "One of the first things I did was create a backstory to try to understand where her devotion would come from," LaThrop explained. "Is it devotion because she believes in the regime, or because she is terrified and being devoted is the best way to stay alive? I sort of started with that, her upbringing, and Gilead is so religious, what caused her to be so loyal to this system?"

LaThrop then shared that most people disliked Ofmatthew because of her "passive" attitude and her initial interactions with June. But given the actress' insight, LaThrop revealed that her character exemplifies how most people would react if put in the same situation.

"I think that [Ofmatthew] has a reaction that a lot of people would have if their whole world is suddenly turned upside down and they’re oppressed," LaThrop said. "Everyone wants to talk about how they would be a revolutionary and how they would be fighting the system, but if you look at even in our own country ... there’s a lot of talk about how it’s upsetting, but there’s not as much action as I would think."

That said, the actress hopes that her character pushes more people to spark some real change in their lives.

"Seeing it and seeing how upsetting it is, I think it’s sort of challenging people to examine themselves," LaThrop said. "And then maybe examine what they can do about their own lives and the ways that they’re maybe being a bit passive."

Although Ofmatthew has her fair share of problematic moments on The Handmaid's Tale, LaThrop's character probably hits closer to home than most. So here's hoping she sticks around for a while longer.