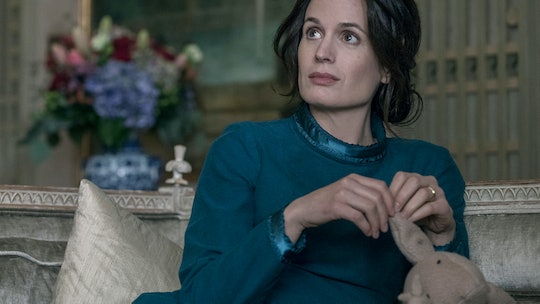 Blessed be the fight. The Handmaid's Tale Season 3 continues on Hulu, and fans are gearing up for a world of hurt. After Serena Joy let fans down by reconciling with Fred, a preview for the upcoming Jun. 25 episode showed the Waterfords determined to steal Nichole back from Canada. In the episode, titled "Household," Serena and Fred find new allies in Washington D.C. And chances are, viewers have seen them before. So who plays Olivia Winslow on The Handmaid's Tale? Elizabeth Reaser has probably been "haunting" your dreams since Oct. 2018.

According to Reaser's IMDB profile, the Handmaid's Tale guest star is known for playing Esme Cullen in the Twilight franchise. However, the actress has an incredible resume dating back to the early 2000s. Television lovers might remember Reaser as Rebecca Pope from Grey's Anatomy, Dr. Alice Alden from Saved, or Tammy Linnata from The Good Wife. You might also recognize the 43-year-old for her role as Shirley Crain in Netflix's popular horror series, The Haunting of Hill House.

As of now, very few details are known about Mrs. Winslow and her Commander husband, played by Law & Order: SVU and Happy! star, Christopher Meloni. But the addition to The Handmaid's Tale cast will likely alter everything fans know about Fred and Serena so far.

Since the Winslows were not part of Margaret Atwood's original story, fans have been curious about the two new characters and what they will bring to the show. When Meloni and Reaser were first cast as the Winslows, Entertainment Weekly teased what's to come. The publication called Commander Winslow "powerful and magnetic." Meanwhile, Mrs. Winslow is on track to befriend and inspire Serena.

Speaking with Entertainment Tonight, The Handmaid's Tale executive producer Warren Littlefield and creator Bruce Miller revealed that the Winslows would build a relationship and alliance with the Waterfords, which would open up doors in D.C.

“There’s a great trajectory for that character,” Littlefield said of the new Commander.

With Meloni and Reaser's new characters joining The Handmaid's Tale in Episode 6, viewers will certainly see a shift in dynamics. Serena and Fred want to manipulate the system to get Nichole back from Canada, but Commander Winslow might have something else in mind. In an interview with Good Housekeeping, Littlefield teased that Fred could have an affair with Commander Winslow.

“There’s a respect, there’s an admiration, there’s a bonding," Littlefield explained. "Is there possibly some kind of attraction here? And Commander Winslow is married with a large family, and that spins Serena Joy’s head, so it’s a wonderfully multi-layered relationship that Fred Waterford finds himself in, with a goal.”

As incredible as this potential relationship sounds, it also sounds incredibly dangerous. Speaking with The Wrap, Miller shared that D.C. is much more conservative than anything fans have seen before. The show creator said:

The reason we’re going to D.C. is, it’s a different environment. It’s a lot more conservative than we’re used to and we’re seeing what the future could be and do for characters like June and Aunt Lydia (Ann Dowd) and for everybody else. It’s a more conservative world and it’s hard to believe there could be something more conservative than the Gilead we’ve seen, but the Handmaids in D.C. don’t talk, they’re not allowed to talk. So I think what I really wanted to do was show that part of Gilead and then have all our characters wonder if they wanna move in that direction or not and it’s a tough decision to make because society may want to move one way but they personally may not.

If you weren't already nervous, you should be. The Handmaid's Tale is diving deeper into the world of Gilead, and things are becoming more entangled and complicated than before. But for now, all fans can do is anxiously watch as the series unfolds.