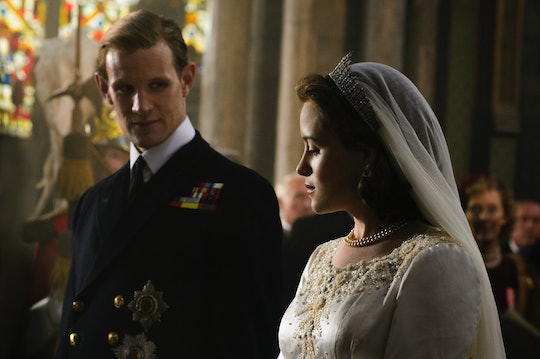 Who Plays Prince Philip On 'The Crown'? Matt Smith Has Already Made His Mark On TV

Odds are, many of you have already immersed yourselves into the first season of Netflix's new drama series, The Crown, which centers around the life of Queen Elizabeth II and the early years of her reign. Claire Foy shines in her portrayal of the famous ruler and the struggles she faces throughout her surprising rise to the throne, but she isn't by far the only standout performance throughout this royal journey. Matt Smith, who plays Prince Philip on The Crown, brings life to Queen Elizabeth's longtime husband in a way that the public has never seen him before. Who is the man behind the monarch, forced to stand off in the shadow of his sovereign wife? It's a question Smith successfully aims to explore.

But that's a journey for you to discover on your own time. I'm here to discuss a little bit about Smith himself because chances are his face looks very familiar to you. That's because this isn't the actor's first leading role in a major TV production. In fact, some could say the parts he played were out of this world. This is, of course, in reference to Smith's time as the Doctor on the BBC hit series Doctor Who.

For three seasons Smith captivated fans with his unique portrayal of the goofy, bowtie-loving, fez-wearing time traveler. He was actually the first Doctor I was ever introduced to before my true obsession with the series began, so I was eager to see him dominate my television screen once more (this time on Netflix), and as I expected, he didn't disappoint.

Whether he's flying a TARDIS or making flirtatious banner with his royal wife, Smith manages to bring charm and adorableness to pretty much everything he does, so I have no doubt his following will only continue to grow in light of this latest role. Prince Philip has never garnered the spotlight like Queen Elizabeth II, which is a struggle that viewers will see the couple struggle with throughout the majority of the first season.

It would be easy to mark Smith's Philip as unsupportive and jealous of this unusual (for its time) gender role-reversal. But Smith manages to bring a sensitivity into play that makes the whole thing a lot more complex (and therefore, more interesting), adding a level of depth to a character who could've easily been overlooked. In short, Matt Smith was the perfect man for the job, so even though I still deeply miss his charisma in the Whovian universe, I'm thrilled to see him shine elsewhere.