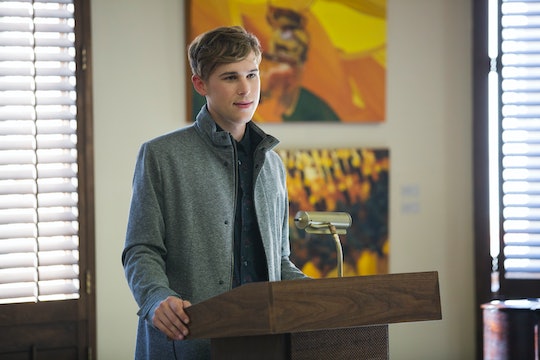 Ryan On '13 Reasons Why' Is A Netflix Newcomer

Netflix’s 13 Reasons Why is about the aftermath of a teenage girl’s suicide and the 13 tapes she left behind to those who played a role in her decision to end her life. But if you needed any more reasons why to check out the new series, it might be the actor who plays Ryan on 13 Reasons Why, because Tommy Dorfman (whose actual name is Marvin, he says) is a new face, but one that will be kind of hard to forget for multiple reasons.

Good looks aside, the New York actor is still so humble about his budding career. Before 13 Reasons Why, Dorfman was in just a couple of short films and a documentary, so this might very well be his big break. And, like I said, he’s pretty hard to forget as is. As an actor, advocate, and an activist, Dorfman regularly posts on social media in support of gay and women’s rights. So as his star power continues to rise, thanks in large part to his unforgettable role as Ryan on 13 Reasons Why, it’s obvious that he plans to use his fame for good and speak out about issues that are important to him.

Dorfman also just married his boyfriend in November of 2016 and they are nothing short of adorable together. Don't believe me? Here's some photo evidence to prove it. (Seriously, though, if these two aren't ultimate marriage goals, I don't know what is!)

According to an interview with The Huffington Post, Dorfman opened up about wanting to work with some big names someday (Gus Van Sant and Sofia Coppola) and where he would like his career to go next for him. “Ever since I’ve been growing up, television has really been putting out incredible character-driven projects that felt more like mini-series’ and movies,” Dorfman said. “So I really seek to be a part of something like that which can go on and that can give the characters a chance to breathe over a long period of time.” With the recent influx of amazing TV shows and the suddenly acceptable hobby of binging said TV shows, that’s obviously where the action is right now.

Despite being a new face, Dorfman's character on 13 Reason Why is another important person in the series who touched the life of the girl whose death is the driving force throughout the 13 episodes. It’ll definitely be interesting to see where he goes next, especially since he’s still apparently super humble and adorable about the whole experience, tweeting with excitement and awe about being interviewed for his role on 13 Reasons Why.

The budding actor will probably be even more recognizable once fans see him in action as Ryan on 13 Reasons Why, but in the meantime, can we all just enjoy how humble and approachable Dorfman is?