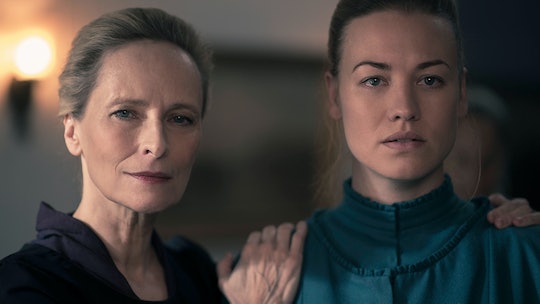 Serena Joy's arc on The Handmaid's Tale has been one of the most gratifying storylines to watch on the Hulu series thus far. She grew from an easy villain in the Waterford household to a morally conflicted woman who realizes she created her own prison. And in the Season 2 finale, Serena gave her baby away for a better life, but the fight — internally and externally — has just begun. Now in Season 3, the hit Hulu series has further explored Serena's character, including the addition of her mother. So who plays Serena's mother on The Handmaid's Tale? Laila Robins' guest starring role changes the game.

The casting in The Handmaid's Tale is no joke. From Elisabeth Moss as June Osborn to Ann Dowd as Aunt Lydia, the drama has its fair share of well-seasoned actors to not only headline, but support the Hulu series. So naturally, The Handmaid's Tale team had quite the task to cast Serena's mother, even if it was just for one pivotal episode.

According to Robins' IMDB profile, the actress has been working in the industry since the late '80s. She has been in a number of high profile projects, including The Good Shepherd, Eye in the Sky, True Crime, and of course, Planes, Trains & Automobiles. Recently, Robins has made appearances on The Bold Type as Pamela Dolan, Homeland as Martha Boyd, and New Amsterdam as Mrs. Ryland. The actress is also an instructor at HB Studio in New York City.

Ahead of the Season 3 premiere, Yvonne Strahovski spoke to Entertainment Weekly about Serena's relationship with her mother.

"It was fun to explore the little girl within Serena, and how her mother makes her feel,” Strahovski said. "She can never quite get through to her. She makes her feel small, she [feels] controlled."

This background was showcased in the third episode, titled "Useful." After Serena burned down the Waterford home, she sought refuge in her mother's New England beach house. It's clear that Mrs. Waterford wants to stay with her mom and leave Fred, but Serena's mother spills a few hard truths.

"Look at you, all the gifts you've been given," she said. "But you need everything to be exactly how you want it. Spoiled little girl. You know there's no place in this world for you without Fred."

And she's right. Serena created the very world she is trying to escape. She knows that as things are, leaving Fred isn't an option. She's trapped.

What's even more horrifying is that Serena's mother knows her daughter is in pain. However, she doesn't offer words of support or understanding. Instead, Serena's mother tries to suffocate her daughter's flame, and it seems to work. That is, until Serena speaks to June.

Strahovski's scenes with Robins were some of the most powerful in The Handmaid's Tale Season 3 premiere. But will Serena's mom return to the show in upcoming episodes? In an interview with Twin Cities Arts Reader, Robins explained that she only signed on for one episode — but she's open to do more.

"I just finished an episode of The Handmaid’s Tale and would be delighted if the role became a recurring one," Robins said. "The show is written and acted and shot so beautifully. I am very honored to be a part of it."

But for now, fans will just have to watch as Serena continues to change — for better or for worse.