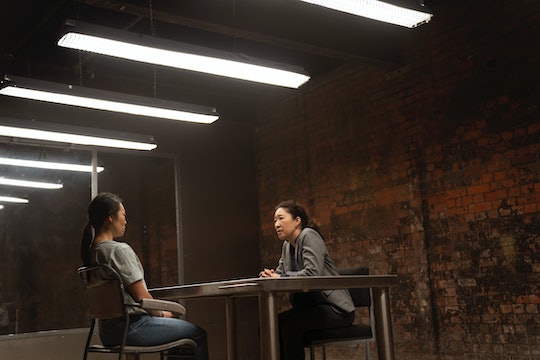 Jung Sun Den Hollander Is The Ghost On 'Killing Eve'

Season 2 of Killing Eve is putting your favorite assassin hunter, Eve Polastri, smack in the middle of a deadly love triangle. Villanelle may have been her main squeeze, but now that a suave new killer named Ghost is in the picture, Eve’ seems to be turning her attentions away. The new assassin's face was finally revealed in the last episode, so now viewers are wondering, who plays The Ghost on Killing Eve?

Actress Jung Sun den Hollander is a relative newcomer to English-language TV, but there’s no doubt this new role will have everyone talking about her in the months to come. According to her IMDB page, Hollander has been in a number of foreign language films over the years, but her last English-language project was a movie called Yellow Jacket, in which she played the role of Detective Blankenbiller.

In a 2018 interview with Humans of Film Amsterdam, Hollander revealed that she grew up in the Netherlands, where she has been working as a theater actor for years. She pursued a Master's degree in acting in London, and then went on to work in in films and on TV. Hollander told the outlet that she has written stageplays in the past, and hopes to move on to screenwriting as her career moves forward. “I also have a lot of experience in writing feature-length scripts for theater with which I produce my own performances in London,” she said. “And because I had recently written the scenario for a music video, I also began to focus more on scripts for feature films.”

Hollander told the outlet that after being born to a Korean mother, she was adopted by her family in the Netherlands. She added that she hopes to one day, write a script that captures the perspective of Korean moms who have to give their children up for adoption.

“I still have dreams with acting, but my ultimate dream is that I finish the script for the feature film that I’m writing now from the Korean birth mother’s perspective,” she told the outlet. “I definitely want to film it in Korea. The script that I’m writing, is a tribute to the Korean mothers who had to give up their children for whatever reason. I went to Korea last year to do research and I came in contact with an organization called KUMFA. They stand up for single mothers and try to generate more awareness for their cause.”

But now that Hollander is on one of the most popular and critically acclaimed shows around, she may need to put her writing career on hold. Right after its debut season, Killing Eve picked up numerous nominations, including an Emmy nod for Outstanding Writing for a Drama Series and a Best Actress Golden Globe win for Sandra Oh. The show has been nominated in a number of categories for the upcoming British Academy Television Awards, with Best Actress nominations for Oh and Jodie Comer, and Best Supporting Actor nominations for Kim Bodnia and Fiona Shaw.

If Killing Eve delivers spellbinding performances for The Ghost in Season 2, Hollander could easily land a Golden Globe or British Academy Television award nomination next year. For now, I’m sure fans just want to see what spell she’s trying to put Eve under.

New episodes of Killing Eve air Sundays, at at 8 p.m. ET on BBC America and AMC.