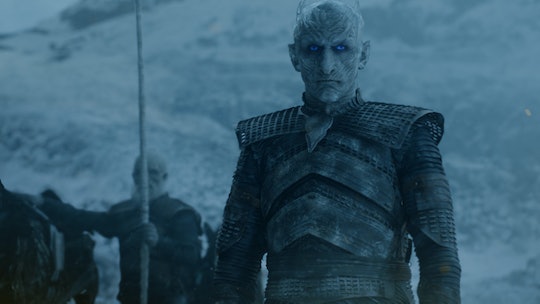 Forget about Cersei, Joffrey, and even Ramsay, because the Night King is probably the scariest villain Game of Thrones has ever seen, and for good reason. But what he doesn't have in common with the other big bads of the series is that he's more magical than human. In fact, fans only got to see the face of the man who plays the Night King on Game of Thrones once in the whole show. Vladimír Furdík, a stuntman, made his first appearance without makeup in Season 6 Episode 5.

Before fuly becoming the Three-Eyed Raven, Bran had a vision of the Children of the Forest turning one of the First Men into the Night King and before the soon-to-be Night King’s eyes turned that familiar icy blue and his skin turned into the rugged and sharp flesh of a White Walker, Furdík was shown as he really is. He’s an experienced stuntman who’s also done work in films like Thor: The Dark World, Skyfall, and The Huntsman: Winter's War. However, Furdík wasn’t always the Night King. He had previously appeared in the Season 6 Tower of Joy episode as a Targaryen soldier stuntman.

Thanks to the fact that the Night King has zero speaking lines and is portrayed in heavy makeup and prosthetics, only the most detail-driven Game of Thrones fans probably noticed that Furdík was new to the show as the Night King in Season 6.

Prior to the two most recent seasons of Game of Thrones, actor Richard Brake played the Night King. But due to scheduling conflicts, he was unable to return to Game of Thrones to reprise his role as the terrifying being who’s a threat to literally everyone in Westeros. Furdík stepped in to replace him and even though it’s a blink and you’ll miss it distinction between the two men, Furdík is the only one of the two of them who got to show his face on the show sans White Walker enhancements.

According to his IMDB, Furdík has been working as a stuntman since 1990 and his credits range from TV shows to movies, so as the Night King, there’s been no need for a stand-in. And, according to showrunners David Benioff and DB Weiss, the Night King will never talk on Game of Thrones. "It's appropriate he doesn't speak," Benioff or Weiss told Deadline. "What's Death going to say? Anything would diminish him. He's just a force of destruction. I don't think we've ever been tempted to write dialogue for the Night King. Anything he said would be anticlimactic."

Since Furdík has been the Night King for the past couple of seasons, he’s likely going to be the one Game of Thrones ends the show with, but whether or not fans will get to see him in his human form again remains to be seen.