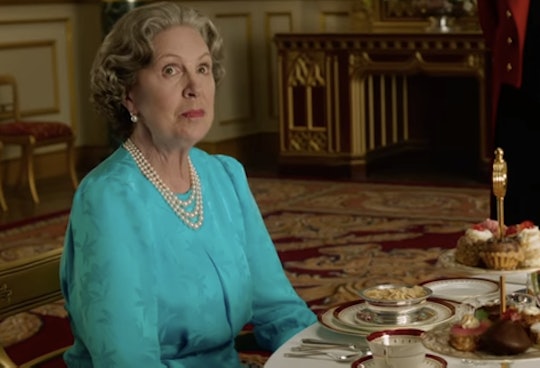 Who Plays The Queen In 'The BFG'? Fans Of 'Downton Abbey' Are Familiar With The Actor

It must be extraordinary to play the Queen, don't you think? And not just a made-up Queen in the fantasy realm but an actual, bonafide real-life Queen. As in Queen Elizabeth herself. How does one avoid the obvious impressions and the affectations? How does one embody the Queen while being respectful and still interesting enough to hold the attention of curious children for a few hours? Well, ask Penelope Wilton. She plays the Queen in The BFG, Steven Spielberg's adaptation of Roald Dahl's 1982 children's story of the same name. And some fans of Downton Abbey might recognize her familiar face.

The BFG tells the story of a precocious little orphan girl named Sophie who is captured by the BFG (Big, Friendly Giant) and brought back to his home in Giant Country. The BFG is unlike your regular, every day giant who wants to dine on the femurs of little children. He was actually quite busy blowing good dreams into the ears of sleeping children with his magical trumpet, thank you very much. When Sophie sees him, he is terrified of being discovered and possibly thrown into a zoo. The two become fast friends and pledge to save human children from becoming lunch for giants, even going so far as to visit the Queen of England to convince her giants are real.

In an interview with Vanity Fair, Penelope Wilton (or Mrs. Crawley to all of us Downton Abbey lovers) talked about why she thought it was important to play the Queen with a stiff upper lip in a movie that's all about fantasy.

“If I played a fantasy queen in a fantasy film, they would cancel each other out and there would be no humor,” Wilton explained. “You have to play the actual Queen, and sort of prick the British reserve to make it funny.”

Wilton, a British actress who has been acting on screen and stage since 1969, spent hours watching video of Queen Elizabeth to really get a feeling for the "private" Queen:

There have been a couple of films made of her with her grandchildren, her on holiday in Scotland, and those kinds of things. So I looked at those to see how she interacted with children . . . she is very straightforward and matter-of-fact. She doesn’t patronize children. She talks to them as if they are grown-ups, really. She was putting [her grandchildren] on ponies and things, and she has a very good interaction with children because she listens to them. I think that’s why the Queen that Roald Dahl wrote has a very good relationship with Sophie, the little girl, because the Queen listens to what she says and believes her.

It is a truly generous actor who is willing to do her research, bring everything she has to a role, and be willing to play second fiddle to a Big, Friendly Giant. But it looks as though that's just what Wilton has done. And let's be fair here... how does anyone compete with a BFG for the limelight?

At least she got some interesting dreams out of the deal, right? Not to mention the chance to wear a triple strand of pearls in bed.