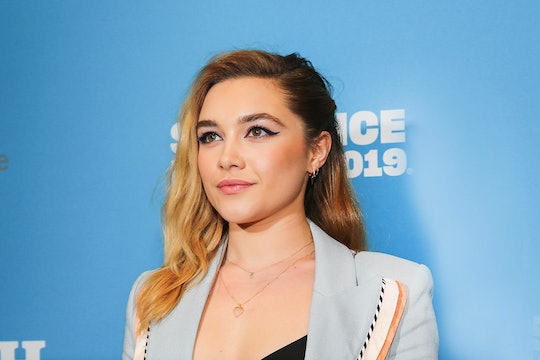 There are some characters in the world who are so iconic, so singularly themselves, that it feels as though it would be impossible to cast them for a movie about their life. Such is the case of English wrestler Paige; a singular personality unto herself. But fortunately in this case, there was someone out there who fit the bill. Well, who worked hard and made sure she would fit the bill, no matter what. If you're wondering who plays WWE star Paige in Fighting With My Family, you're going to be excited to learn all about Florence Pugh. Because she's a particular kind of dynamo herself.

The film is based on the 2012 documentary called The Wrestlers: Fighting With My Family and focuses on the life of Saraya "Paige" Bevis who grew up in a family of professional wrestlers. Paige is eventually signed to wrestle with the WWE while her brother Zak is not, and obviously this causes massive conflict in the family. Starring Vince Vaughan, Lena Heady, and even featuring real life former wrestler Dwayne Johnson (who also executive produced), there's clearly a star line up for this movie. But everything sort of hinges on Paige, doesn't it? I mean, Paige is the one who, in 2014, won the Divas Championship, becoming the youngest champion in the title's history. This is her story.

Florence Pugh knows a little something about being young and well respected in her field as well. The 23-year-old actress from Oxfordshire, England made her debut in the 2014 film The Falling and went on to star in the independent film Lady MacBeth in 2016. Her performance was so strong that she went on to win the British Film Award for Best Actress that year.

Pugh's short career has already been well received, and it looks as though Fighting With My Family is going to follow along the same trajectory. After premiering at Sundance Film Festival in January the reviews came back strong, particularly regarding Pugh's performance. As Variety wrote in a review of the movie, "the actress still contributes another impressive turn to her fast-tracked resume."

Which seems fair, considering how much work the young actress had to put in to becoming Paige. Like actually learning how to wrestle other professional wrestlers, for instance.

In an interview with WWE, Pugh explained that her journey to becoming Paige for this movie was an "extraordinary roller coaster," especially when she was learning how to wrestle from Dwayne "The Rock" Johnson himself:

Dwayne came to help me, and I remember just standing in the ring and going, 'Oh my God, Dwayne is teaching me how to punch.' It was like, 'This is a moment I can cherish for the rest of my life.'

Despite being obviously new to the world of professional wrestling, Pugh admitted she eventually took to it quite well:

Pugh might not be a professional wrestler, but she clearly has the grit to play one in a movie. No wonder everyone is talking about Fighting With My Family, which opened across the country on Thursday.