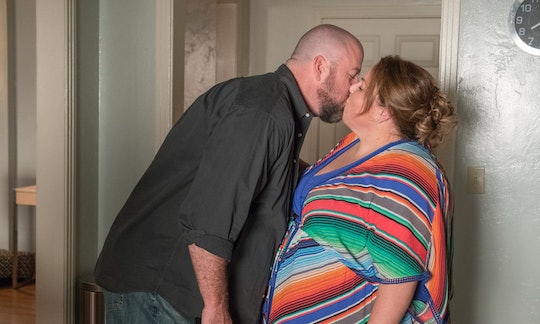 Last week's This Is Us end-of-show promo dropped a few major clues about Toby's mental health and it was, in a word, sad. The clip shows a young Toby lying on his bed while chewing his "finger nails right down to the nub," as his mother says. He's anxious and forlorn, foreshadowing his adult struggles. So who plays young Toby on This Is Us?

Young Toby flashbacks will be played by 15-year-old Luke Clark who's otherwise starred in The Orville and Fat Camp. There isn't a lot of info out there on the actor, but he's just been cast in The Three Little Stooges as Curly and also has an affinity for Star Wars and Transformers, according to KTVN News. Who doesn't, am I right? His talent, his mom said to the news station, started with local acting lessons. "Ten months later," his dad added, "we had an agent from LA come up to look for new talent and they invited him down to read for their youth group and they signed him the day he went."

Even with sweet roles like young Toby Damon or Curly, Luke still has to maintain good grades. To make things easier, he's enrolled with Northstar Online as part of Washoe County School District. When filming he said he takes his laptop with him. "So, it's really the flexibility of the schedule that allows me to do what I do.” As for what kind of kid he is off the set, his dad weighed in during the same interview. “He’s a great kid. His mom call him an old soul.” Can I be the first to say "aww?"

In terms of the This is Us sphere, fans of the show know Toby's anxiety and depression have been a quiet, lingering thread throughout all three seasons. He only recently made it clear he needs his medication to keep from crying all day. Knowing Toby, he'll crack a joke until there aren't any left (what we're about to embark on, I believe).

When their fertility doctor advises that Toby's antidepressants could be lowering his sperm count and making it harder for he and Kate to conceive he dumps his antidepressants down the toilet. Nothing good can come of this. The promo for the upcoming episode (shown above) focuses heavily on his suffering through the ages while interweaving Kate's pregnancy progress after a successful egg retrieval. The clip also shows Toby having a breakdown and Kate consoling him. It's downright gut-wrenching and, unfortunately, so relatable.

As someone who also suffers from anxiety and depression, I'll be watching to see how this plays out with all versions of Toby. His sacrifice for Kate is admirable, but I can't help but think this is the beginning of the end of the couple. As for young Toby, I already want to hug him. It's unclear if there will be more of Young Toby in future episodes but if there are, I'm sure it will be focused on Toby's mental health, or what led him to where he'll be in Tuesday's episode.

This is Us showrunners have always been great at mirroring real life and I think that's showing through Season 3 as much as the previous two. Regardless of how much I already hurt for this story line and the young character, I hope little Toby — and adult Toby — find their way sooner rather than later for the sake of everyone walking in those same painful shoes.